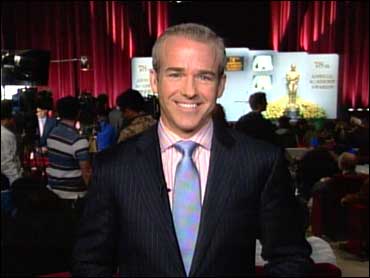 The Oscar nominations are creating buzz from coast to coast.

In the running for best picture are "Brokeback Mountain," "Capote," "Crash," "Good Night and Good Luck" and "Munich."

The Early Show entertainment correspondent Jess Cagle was in Beverly Hills for the nominations.

He told co-anchor
Hannah Storm that "Crash" could be the dark horse on that list.

Cagle also said it was a big surprise that the Johnny Cash story, "Walk the Line," did not make the list for best picture. However, co-stars Reese Witherspoon and Joaquin Phoenix were each nominated for acting.

"'Walk the Line' is the one contender that has made over $100 million and that was not nominated for best picture," he told Storm.

Also shut out from the best picture list was "King Kong," whose director, Peter Jackson, also directed the "Lord of the Ring" movies.

"I think that the link hurt that movie," Cagle said. "It did not get the great reviews. The slow start at the box office did not help either."

It was a big day for Terrence Howard, nominated for his acting in "Hustle and Flow" and Cagle says that was a well-deserved vote of confidence.

"He did a great, great job in it," he told Storm. "Also, he gave a great performance in 'Crash,' as well. I'm glad to see him nominated somewhere."

Paul Giamatti was nominated for best supporting actor as a boxing manager in "Cinderella Man."

The best-actress race could turn into a two-woman contest between Felicity Huffman in "Transamerica" and Reese Witherspoon as singer June Carter in "Walk the Line."

Witherspoon beat Huffman on Sunday for the best-actress prize at the Screen Actors Guild Awards. Huffman is a first-time Oscar nominee but most fans know her from her role on "Desperate Housewives."

Huffman's portrayal of a transsexual in "Transamerica" was not an easy transformation, she told co-anchor Julie Chen backstage after winning an award at the Golden Globes.

"I couldn't quite scale it at first," Huffman said. "First I had to understand her internal journey and, once I figured that out, then I tackled the fact that she was transgender.

Chen asked Huffman whether the role made her look differently at being a woman.

"The only thing that I actually looked at differently was the effect of hormones and how that really changes your personality and who you think you are is actually a lot the makeup of hormones," Huffman said.

After wrapping up her work on the film, it took Huffman a while to feel comfortable with her character on "Desperate Housewives."

"I had five days in between the movie and when I started the first season with 'Desperate Housewives,' " she said. "When you look at those first four or five episodes, I'm not quite on top of my game."

In the end, it was well worth the struggle.

"It's the role of a lifetime," Huffman told Chen. "I would have begged, borrowed and stole just to have a shot at an audition for this movie."