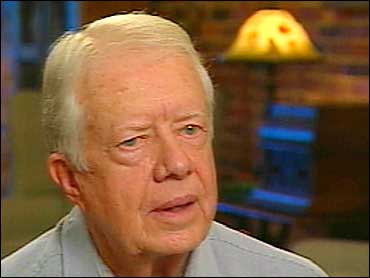 In a more pleasant part of the news, I talked to Jimmy Carter not so long ago and remarked he might be one of the few men who served in the presidency and did not consider it the highlight of his life.

The moment I said it, I sort of regretted it. Even if he did feel that way, it could be taken as a way of saying his presidency hadn't amounted to much.

But he didn't take offense. He laughed, and when he won the Nobel Peace Prize last week, he said about what I had said.

The Camp David Accord that President Carter forged removed Egypt as a combatant against Israel, and that is no small accomplishment. But that accomplishment was overshadowed by the long gas lines brought on by an Arab oil embargo and the capture of American diplomats in Iran. And Jimmy Carter's name became synonymous with incompetence.

Never a man of wealth, he discovered on leaving the White House that he was a million dollars in debt.

Yet at a time when some would have chosen to do less, he set out to do more.

He wrote books to support himself and raised money to create the Carter Center, which has become a major vehicle for mediating disputes and fighting disease.

Just one example: Because of Carter, Ginny worm an insidious human parasite once rampant in Africa, has all but irradiated in Ethiopia, Uganda and most of the Sudan.

Carter told me he saw a cartoon once in which a small boy looks at his father and says, "When I grow up, I want to be a former president." Well, it's a fine ambition if you do it the Jimmy Carter way.