5302808Here's a roundup of the latest news on the continuing controversy surrounding Rep. Joe Wilson, R-S.C., who last week made headlines for interrupting President Obama's speech to Congress on health care by shouting "You Lie!" from inside the House chamber.

"Wilson said emphatically Sunday that he won't apologize to his colleagues for defaming President Barack Obama, increasing the likelihood that the House will pass an official reprimand as early as this week," writes McClatchy Newspapers' James Rosen.

"Wilson was more defiant than contrite in answering a series of sharp questions from Chris Wallace on 'Fox News Sunday,' his first appearance ever on a Sunday morning talk show.

"The South Carolina Republican left little doubt that he will reject House Democratic leaders' demand that he stand on the floor and apologize to other lawmakers for his 'You lie!' shout during Obama's address to Congress last week.

"'I am not going to apologize again,' Wilson said. 'I believe the American people know I'm a civil person. I respect the institution of the House. I have apologized to the president. I believe that should be enough.'

Wilson issued a hard-hitting statement after the news program.

"'The American people are fed up with the political games in Washington,' he said. 'I refuse to participate in an effort to divert our attention away from the task at hand of reforming health insurance and creating new jobs. Having apologized on Wednesday to the White House, we agreed that we must move forward in a civil manner to do the work the American people have sent us here to do.'"

"Democratic leaders have said they will introduce a 'resolution of disapproval' Monday or Tuesday unless Wilson formally apologizes on the House floor. The House returns Monday," adds The Hill's Mike Soraghan.

"Wilson apologized to White House Chief of Staff Rahm Emanuel on Wednesday evening and, on Thursday, Obama said he accepted Wilson's apology. Democratic lawmakers note that he was pressed to do so by Republican leaders.

"'There was a violation of the rules of the House,' said Pelosi spokesman Brendan Daly. 'It needs to be resolved by an apology or a resolution.'" 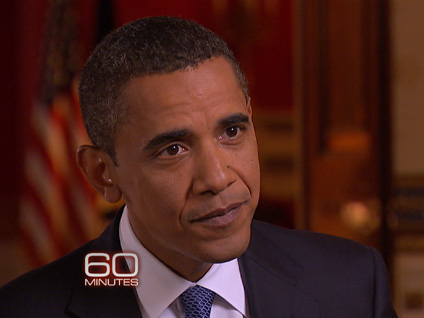 "You were heckled. Not at a town meeting. Not on the campaign trail, but in the joint session of Congress," CBS News' Steve Kroft said to Mr. Obama. "Were you surprised?"

"Well, Congressman Wilson, shouting out during my joint sessions speech was a surprise not just to me, but I think to a lot of his Republican colleagues," the president said. "You know, said that it wasn't appropriate. He apologized afterwards, which I appreciated. I've said so. Truth of the matter is that there has been I think a coarsening of our political dialogue. That I've been running against since I got into politics."

Kroft asked Mr. Obama if he thought the House should rebuke Wilson.

The president chuckled and said, "But see, this is part of what happens. I mean, it becomes a big circus instead of us focusing on health care."

Meantime, Mary C. Curtis writes on Politics Daily that there was plenty of support for Wilson back in his South Carolina congressional district at a Friday rally there.

"Most folks I spoke with said they were sick of being caricatured when all they want is what they think is best for America. And they think that Joe Wilson has apologized enough," writes Curtis. 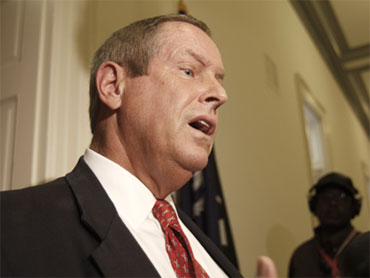 (AP Photo/Harry Hamburg)
"Wilson's supporters in West Columbia didn't yell or scream. But if President Obama is looking for common ground, he won't find it here. [Art] Durazzi, 66, doesn't live in Wilson's district but traveled from Lake Wylie with his wife, Sal. He wanted to make sure I wouldn't question the sincerity of his beliefs, though he questioned Obama's: Why is it taking this president so long to find a church, 'longer than it took to find a dog for his girls'? His wife worried about debt, their six children and six grand-children, and Obama 'changing the Constitution.'

"Tommy Richardson, a veteran from Lexington County, was with his congressman all the way: 'To be honest with you, why not? The liberals get to say whatever they want to say.'"

The Los Angeles Times' Peter Wallsten writes that some Republicans are concerned that Wilson's outburst is just the tip of a very extreme iceberg.

"Amid a rebirth of conservative activism that could help Republicans win elections next year, some party insiders now fear that extreme rhetoric and conspiracy theories coming from the angry reaches of the conservative base are undermining the GOP's broader credibility and casting it as the party of the paranoid.

"Such insiders point to theories running rampant on the Internet, such as the idea that Barack Obama was born in Kenya and is thus ineligible to be president, or that he is a communist, or that his allies want to set up Nazi-like detention camps for political opponents. Those theories, the insiders say, have stoked the GOP base and have created a 'purist' climate in which a figure such as Rep. Joe Wilson (R-S.C.) is lionized for his 'You lie!' outburst last week when Obama addressed Congress."

Some Democrats see the president's race as what drives his opponents, writes Politico's Jonathan Martin.

"Eight months into Barack Obama's presidency, as criticism of his administration seems to reach new levels of volume and intensity each week, the whispers among some of his allies are growing louder: That those who loathe the nation's first African–American president, and especially those who would deny his citizenship, are driven at least in part by racism.

"It's a feeling that's acutely felt among those supporters of Obama who are themselves minorities. Conversations with Democrats at an otherwise upbeat Democratic National Committee fall gathering here, an event largely devoted to party housekeeping, reflected a growing anger at what many see as a troubling effort to delegitimize Obama's hold on the office."