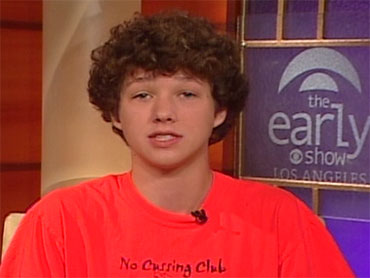 McKay Hatch has a surprising agenda for a 16-year-old: He wants you to watch your mouth.

Hatch is on a crusade to stamp out cussing. Two years ago, the California teenager founded a "No Cussing Club" at his school after all of his friends started swearing.

"This bothered me. And I challenged them," Hatch said on "The Early Show." "And another reason is because I saw a lot of my friends that were cussing just because they saw other kids doing it. They thought it was the only thing that they could do to be cool."

His Web site now has thousands of members, and he hopes to make the "clean language" trend global.

So far, Hatch has established "Cuss-Free" weeks in his city and county. His "Cuss Free" week effort made it all the way to the state level, but just missed being passed Monday in the California Senate.

Now he hopes to find a sponsor for a national tour.

For more on Hatch's efforts, click on the video below.