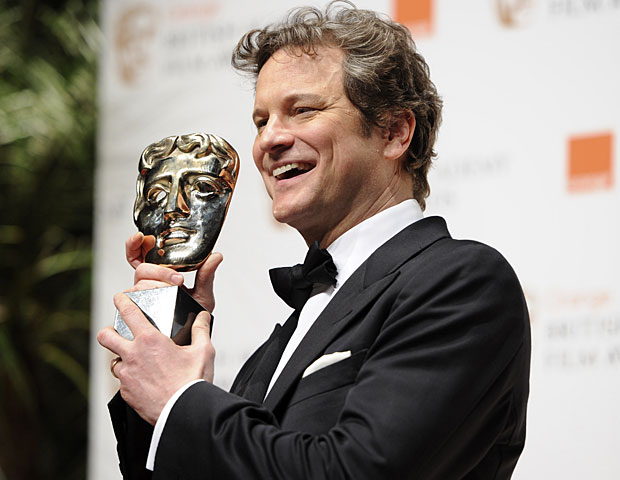 LONDON (CBS/AP) A neurotic ballerina, an enterprising computer nerd and a grizzled cowpoke failed to oust "The King"s Speech" off its throne Sunday night at Britain's top film awards ceremony.

The royal drama "The King's Speech" was crowned the big winner at the BAFTAs, Britain's version of the Academy Awards and it bodes well for the movie's chances with Oscar.

Last year, 12 of the 18 major BAFTA winners repeated with victories in their corresponding categories at the Oscars.

The made-in-England story of King George VI and his struggle to overcome a stutter won seven prizes Sunday, including best picture and acting trophies for Colin Firth, Helena Bonham Carter and Geoffrey Rush.

"The King's Speech" went into the awards as heavy favorite with 14 nominations -- an unexpected British triumph that cost a reported $24 million to make and has taken many times that at the global box office.

It beat "The Social Network," "Black Swan," "Inception" and "True Grit" for the best picture prize.

Perfectly timed in a year that sees the royal wedding of Prince William and Kate Middleton, the movie tells the true story of George VI, thrust unexpectedly onto the throne by his elder brother's abdication, and his battle to overcome a stammer with the help of an unconventional speech therapist.

Screenwriter David Seidler said he was astonished that this small film about "two men in a room" had been so popular around the world.

The British-American writer, who overcame a childhood stammer and has worked on the screenplay for 30 years, said that "for a stutterer ... to be heard is a wonderful thing."

As expected, Firth won best actor for his portrayal of the reluctant monarch. He has already won best actor trophies at the Golden Globes and the Screen Actors Guild Awards and is a favorite for an Oscar.

"I like coming here," said Firth, who won the same prize last year for "A Single Man."

"I think I should thank the royal family, frankly, because they've done wonders for my career," Bonham Carter said.

Bonham Carter, who also recently played the giant-craniumed Red Queen in husband Tim Burton's "Alice in Wonderland," joked that "I seem to be playing queens with ever-decreasing head sizes."

Writer-director Chris Morris took the prize for best British debut for "Four Lions," his comedy about a group of bumbling would-be suicide bombers.

Swedish thriller "The Girl With the Dragon Tattoo" was named best foreign language film. Producer Soeren Staermose joked that its no-holds-barred heroine, Lisbeth Salander, was "the scariest thing to come out of Sweden since ABBA."

The awards, known as BAFTAs, are considered a strong indicator of possible Oscars glory. Last year, Iraq war drama "The Hurt Locker" won six BAFTAs, including best picture -- then repeated the feat at the Oscars.

Britain's movie industry is facing uncertainty amid an economic slowdown and government funding cuts. "The King's Speech" was partly funded by the U.K. Film Council, a body recently abolished by the country's Conservative-led government.

The ceremony tried to lift the mood and celebrate British success, giving an award to the money-minting "Harry Potter" franchise for outstanding British contribution to cinema.