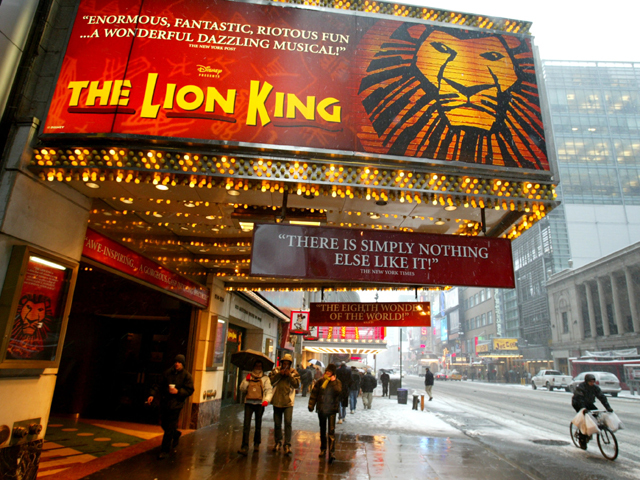 "The Lion King" has more reason to roar -- it's on pace to end the week as the first Broadway show to earn $1 billion.

According to The Broadway League, the show ended last week with a 16-year gross of $999,267,836, and it regularly pulls in between $1 million and $2 million a week over eight performances at the Minskoff Theatre.

The show, featuring the music of Elton John and Tim Rice, including the Academy Award-winning "Can You Feel the Love Tonight," brought the 1994 animated Disney movie to life onstage in 1997. Director and designer Julie Taymor, who also served as the first director of "Spider-Man: Turn Off The Dark," created the memorable costumes, puppetry and scenic design.

"This humbling milestone is a testament to the vision and artistry of Julie Taymor," producer Thomas Schumacher, president of Disney Theatrical Productions, said in a statement.

"For nearly 17 years she has been (the) guiding creative force and an inspiration to the show's brilliant cast, musicians and crew. But above all, we thank our loving audiences who continue to be moved and delighted night after night at the Minskoff Theatre and all around the world."

"The Lion King" has been a model of consistency in its march through records. In April 2012, it swiped the title of Broadway's all-time highest-grossing show from "The Phantom of the Opera," despite "Phantom" having almost a full 10 years' head start. The Disney show opened in November 1997, while "Phantom" debuted in January 1988.

Overall, the show has made $5 billion across 21 global productions including shows in Japan, Australia, South Africa, Singapore and Brazil. This summer, Disney announced the show's total touring box-office gross in North America alone had reached $1 billion.

Part of its longevity is due to the movie tie-in, simple-to-understand story, family friendly themes and the fact that it's a spectacle not dependent on big-name stars - important for attracting tourists whose command of English might be weak. Some 11,215,000 have seen it on Broadway, according to data from The Broadway League.

The show is breathing down the neck of "Les Miserables" for the title of fourth longest-running Broadway show, behind only "Chicago," "Cats" and "The Phantom of the Opera." "Les Miserables" closed in 2003 after 6,680 shows and "The Lion King" will end this week with 6,621.