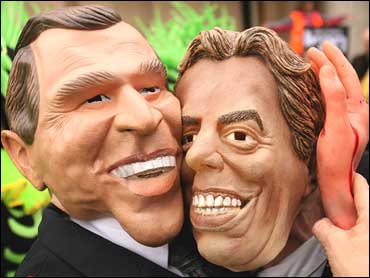 This column was written by Simon Prentis.

To those of us here in Britain, there is an Orwellian edge to the news that George Bush is invoking executive privilege to protect his policies from Congressional investigation. Just like that scene in "Animal Farm," when the newly-liberated animals start to believe that some are more equal than others, it sounds like the President of the United States has reverted to the divine right of kings. Wasn't that something you guys fought so hard to escape from? The phrase "I'm the decider" may have a certain folksy charm that Charles I would never have stooped to, but it's clearly coming from the same stable. And we should be just as suspicious of it now as we were then.

I say "we," because even though you decided it was wiser to cut and run, risking all for a new life across the pond, those of us you left behind in the seventeenth century didn't like it any more than you did. Nobody does; it's humiliating to have to submit to someone who thinks he's unaccountable. We tried our hand at civil war, cut the head off our king and toughed it out for a while, but in the end our nerve failed us. And as we negotiated our shabby compromise with royalty, you moved the project forward with a nation devoted for the first time to the cause of liberty - leaving us to watch with an older brother's bitter blend of scorn and envy as his younger sibling threatened to outdo him.

As, of course, you eventually did. And little wonder. With the dispossessed of every land flocking to your shores in search of life on a level playing field, you were a beacon of hope for those on the run from tyranny and oppression. France even sent you the Statue of Liberty, a gift to mark your first centenary, and a fitting symbol of what you represented to ordinary people everywhere. Fueled by the power of this American Dream, you were then the beneficiary as the Old World fell apart over its ancient tribal rivalries. For a while, you shone as the best hope for stability and civilization in a world now facing a new kind of tyranny, the ideological impasse of the totalitarian state. But as the cold war ended, the mad math of the military buildup left you the de facto policeman of the world.

What a chance you had then to use such awesome power for the good! To use that unique moment in history to reform the international institutions, make them truly democratic and bring the dream of world peace to fruition by consent! But the price of freedom, then as now, is vigilance; and somehow the lumbering giant of American democracy fell asleep at the wheel, tranquilized by its own success. The neocons - cheered on by our very own neocon-man, Tony Blair - were allowed to let that power go to their heads. And what they decided was not that the world was to be one but that it was theirs to be won - by force if necessary.

Back here in Britain, when Bush came to shove and we were asked to sign up for the Iraq debacle, we turned out for the biggest demonstration in British history, with more than a million people choking the streets of London in protest against such lunacy. I know - I was there with my family, and old friends and new from all walks of life. We were there because we knew there was more at stake than the same old corruption of power. We were there to protest the assertion of executive privilege on the grand scale - the sidelining of the UN, the flouting of international law and the principle of the pre-emptive strike.

Of course, it didn't do much good. As an old Empire on our uppers, we can only ever hope to play Greece to your Rome, with our leaders clinging lamely to your coattails. But this is not about empire anymore. It's about the future of our children, the future of the human project, the future of our planet. Because unlike the days of the Founding Fathers, there's nowhere else for us to go - the ground has run out under our feet. Whether we like it or not, we're all in this together now. The only place left to make a fresh start is where we already are.

So as we watch your President elevate an excuse for evasion into a point of principle, we can't help wondering whether history has come full circle. Does this mean the world's most successful political experiment is destined to fail after all? Will the land of life, liberty and happiness succumb to presidential prerogative? For the sake of the rest of us, for the sake of the world, we can only hope you care enough to call your neo-King George to account, and say it ain't so.
By Simon Prentis