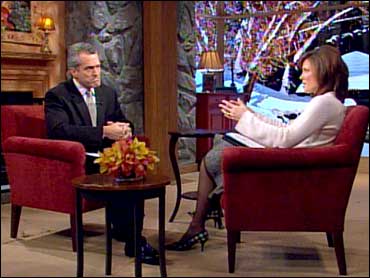 For first-time home-buyers, the allure of no-money-down loans can be hard to resist. The latest survey by the National Association of Realtors shows that 43 percent of first-time buyers used that type of mortgage last year.

The danger is that those owners could actually end up owing more money than their home is worth.

The new survey analyzes home buying activity for 2005 and found that the average age of first time home buyers last year was 32. Their median household income was about $57,000 a year. By taking a mortgage for 100 percent of the value of their home, they are buying before they have saved for a down payment.

The Early Show's personal finance advisor Ray Martin says it is a better idea to stick to the standard 10-20 percent down payment.

"But these no-money-down loans are popular because first-time buyers perceive home prices are going up," Martin said, adding that people may feel pressure to jump into the market while they can. "People are probably also doing this because they are buying more home than they could otherwise afford, thinking that's a good idea, too."

Martin says a 100 percent mortgage can haunt you.

"Let's say you get a new job and have to sell the house and move and you are in a region where prices did not go up, they actually fell," he said. "You are going to have to write a check to the buyer at the closing table so they can take that home off your hands. You have to pay money to sell your house. That's called being under water."

As for specific trouble spots, the regions that appreciated the most in the last four or five years are forecast to be most at risk for a price fall between now and 2008. According to Martin, those regions are primarily along the east and west coasts and include Sacramento, San Diego, Los Angeles, Boston, Providence and Long Island.

As for 2006, the National Association of Realtors says sales are probably going to decline 4.5 percent to 5 percent on existing homes, although prices in some regions may edge higher.

Martin also said he is hearing the term "transitional market" for the first time since 1990.

"The market is moving away from a seller's market to a buyer's market. That means sellers put their houses on the market trying to sell urgently, to get out at the top," Martin said. "Buyers don't know what to pay because they are feeling like it's a little frothy and maybe prices will come down.

"Realtors, caught in the middle, don't know how to advise buyers and sellers. There's confusion and realtors that have been pros in the business for a long time tell me it's the hardest market to negotiate … especially for first-time buyers."

For buyers who opt for the no money down loan, Martin has two suggestions.

"Start saving and paying extra toward the principal on that loan so you are eventually making your down payment now," he said. "Or you can refinance the loan with down payment money into a fixed rate loan to get into a better position."