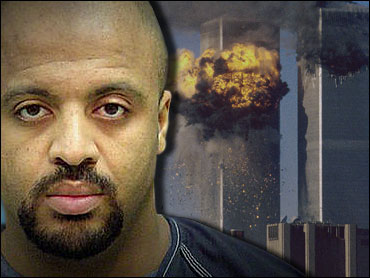 This column was written by Terence Samuel.

Patrick Kennedy is in rehab, Porter Goss is in retirement and President Bush continues to be in deep doo-doo with the American people over everything from the price of regular unleaded to the costs of the Iraq War. All of which made last week's sentencing of Zacarias Moussaoui a relatively small story by comparison. And it could be that the anticlimactic outcome of the Moussaoui trial means nothing beyond the fact that some loony is going to jail, finally getting what he deserves, and, more bizarrely, what he wants. That could be the case.

But September 11 is too deeply etched into our psyche for that theory to hold any water: It has been too affecting on our lives, our politics, and our sense of vulnerability for the fate of the only convicted conspirator to be entirely insignificant.

Who would have imagined three or four years ago that any jury in the United States would have passed up the opportunity to execute someone connected to the 9-11 attacks, much less someone who has taunted us, bragged of and exaggerated his role in the attacks, and who insists that his intended role was to do even more damage? How does this guy get to live?

When you remember — and who can forget? — the pain, the fear, and the impulse for revenge that followed 9-11, it is difficult to explain how Moussaoui escaped execution. But something's happened to that 9-11 psyche — and that something is the bungled misadventure that is Iraq. Americans who supported the war did so because they were persuaded, or were hoping, that it would turn out to be a reasonable response to 9-11.

But having watched the entire rationale for the Iraq War turn to dust, we are now not only completely skeptical about the war and those who so desperately needed to prosecute it, we are also re-examining all the false logic that flowed from the trauma of 9-11. And it is this burgeoning sense of perspective that may have saved Moussaoui's life. It is what has pushed President Bush's approval rating to 31 percent in the latest polls. It is why Donald Rumsfeld has to take questions on why he lied to the American people, and it is why, come Election Day in November, Republicans may find themselves in high, angry water.

Now, it seems, people understand that Saddam Hussein is not Osama bin Laden, that the war in Iraq is not really a war on the terrorists that pulled off 9-11. And now they know that the war was not just misguided, but a vast collection of miscalculations and deceits wrapped in ideological rationalizations. A new bumper sticker making the rounds sums it up: Alongside a photo of Bush, it says, "WTF?" Indeed.

There was something a little empty in finally seeing Moussaoui go to jail. He is such a small, pathetic figure, so unmatched to the scale and depth of the tragedy that was and is 9-11, that there is almost no sense of justice, and little satisfaction, in seeing him go off to some "supermax" prison in Colorado to serve out the rest of his days.

There was always a taint of pointlessness to the Moussaoui trial. After all, the real hijackers were dead and Osama Bin Laden was still out there snickering at his triumphs and threatening more harm by his very survival.

And it was always true that this trial was more about us than about the terrorists. When the jury decided against the death penalty for Moussaoui — the only person we have in hand to blame for 9-11 — it may have been the biggest indication yet that we are getting some perspective on how we should react to the awfulness of that day in 2001.

And we know now that the war in Iraq was the wrong way to go. We have seen what the wrong reaction can produce. And while we may be able to populate an entire Middle Eastern country with Americans who would volunteer for the bin Laden firing squad, we are no longer in the mood for vengeance at any cost. Understanding now that the administration, and other proponents of the war, abused the sense of fear and vulnerability that followed 9-11, to get us into Iraq, Americans are being more careful, are sifting through the arguments better, and are less willing to give the benefit of the doubt.

The government response to the Moussaoui verdict has been that the American system of jurisprudence allowed Moussaoui advantages that he should not have enjoyed as a terrorist, and that our high standards of scrutiny, deliberation, and proof saved his life. "There are challenges that exist with respect to prosecuting terrorist cases in our system," Attorney General Alberto Gonzales said. "I think justice was served in this case." He's right.

But there is another jury waiting out there. With all its arbitrariness, randomness, and unpredictability, politics could not be less like law. But after Iraq, Americans are scrutinizing the Bush White House more deliberately than they have at any other time in the last five years. And come November, Republicans may not find that jury so forgiving.

Terence Samuel is a political writer in Washington, D.C.