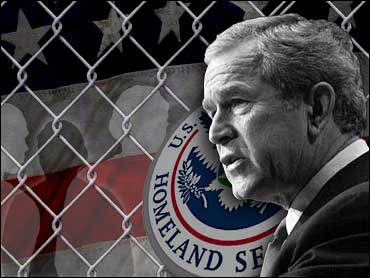 This column was written by Duncan Currie.

Besides that whopper, few rhetorical tropes are as inane as the suggestion that a U.S.-made security fence along the Mexican border would be no different than the Berlin Wall, which separated (Free) West Berlin from (Communist) East Berlin. The Cold War parallel, a favorite of Mexican politicians and activists, is frequently trumpeted by Democrats such as Sen. Ted Kennedy and Rep. Sheila Jackson Lee. But even the Wall Street Journal editorial page, the most consistent voice of the open-borders right, trotted it out shortly after President Bush unveiled his guest-worker program in January 2004. "We could always . . . build a Berlin Wall along the 2,000 miles of U.S.-Mexican border," the Journal mused, "but we doubt Americans would be morally comfortable with [that]."

Last December, House Republicans took heat for endorsing some 698 miles worth of Mexican border fencing. So now we know the crucial difference between sensible border enforcement and crude "immigrant bashing" — about 328 miles of fencing. Fences that cover 698 miles are a noxious emblem of right-wing nativism. Fences that cover 370 miles are a reasonable means to fortify American security.

The fencing debate reflects the general frivolity of the immigration row. If building 370 miles of border fencing is worth the trouble, then building 698 miles of fencing seems to be at least a reasonable option to consider. Either fencing will help discourage illegal border crossings, or it won't. Yet many senators who pronounce themselves "serious" about dealing with illegal immigration scorned the House bill but then turned around and voted for the Sessions legislation last week. Maybe they felt pressure to look tough on border security. Or maybe they decided that fencing wasn't such a bad idea after all.

Either way, last week's vote may signal a watershed. We now have 28 Senate Democrats — more than half of the caucus — on record favoring beefed-up security fencing to cover nearly one quarter of the U.S.-Mexican border. That indicates a tidal shift away from open borders and toward vigorous enforcement.

There are three principal arguments against security fencing. The first rests on symbolism. To wit: It would send a terrible message to Mexico — "Mexicans Not Wanted" — if America chose to wall itself off from its southern neighbor. Building fences would be a primitive, and physically unattractive, solution to the problem of illegals. California governor Arnold Schwarzenegger has mocked the idea as "going back to the stone ages." The world would conclude that Pat Buchanan's "America First" wing had triumphed, that the United States was retreating behind a fortress mentality of neo-isolationism.

The second criticism makes a fiscal point: How much would reinforced border fences set back U.S. taxpayers? Senator Jeff Sessions, who introduced last week's fencing bill, has gauged the costs of his amendment at about $1 billion. The estimated costs of erecting walls similar to Israel's West Bank security fence to bracket the entire U.S.-Mexican border range anywhere from $4 billion to upwards of $8 billion. (The numbers deviate wildly based on the agenda of the person or group making the calculation.)

Is the price too high? That question gets to the third, and most compelling, anti-fencing claim: that it won't work. "You show me a 50-foot wall and I'll show you a 51-foot ladder at the border," declared Arizona governor Janet Napolitano last December. In other words, migrants determined to reach America will not be deterred by physical barriers. But trying to fence them out will waste money and give Uncle Sam a black eye in the PR battle.

Despite such elite skepticism, polls show that most Americans support security fencing along the Mexican border. Unless they are all nostalgic for Walter Ulbricht and Erich Honecker's East Germany, these Americans seem to reject the "Berlin Wall" sneers. They must appreciate the stark difference between a totalitarian regime that treated its own citizens as prisoners and a liberal democracy that merely wishes to drive illegal aliens into the proper immigration channels.

That said, is massive border fencing in America's interest? Would it succeed in quelling illegal immigration? How would it affect the estimated 10-12 million illegal aliens already here? Would it help us conclusively resolve the fight over "amnesty"? We've yet to see a substantive discussion of these questions, so charged have been the verbal histrionics on both sides.

But when 28 Senate Democrats jump on board with the concept of security fencing, you know it's an idea that merits serious bipartisan debate, rather that just casual dismissals and partisan bombast. Thanks above all to Sen. Sessions, we may now have that debate.

Duncan Currie is a reporter at The Weekly Standard.