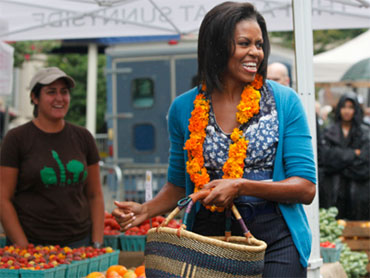 President Barack Obama is making a full-out media blitz for health care reform this weekend, and he's getting some help from a very familar face.

Michelle Obama will be like a stealth weapon, said Plante, giving it a softer touch, .

"It has truly inspired me and the White House staff to look for opportunities to put the topic of healthy eating on the table and at the forefront of health care discussions," she said.

With a favorable rating of around 70 percent, well above her husband's, and with the background of a hospital executive, Michelle Obama will counterbalance her husband's hard sell.

"They feel like she can give a different voice, because as you can see, a lot of folks out there are very partisan," said Nia-Malika Henderson of Politico.

"People like her; every poll shows that," Schieffer said "The Early Show." "And I think presidents' wives can kind of soften the debate, take the hard edge off of it.

"Is she going to make a big difference . . . be the one that tips the balance toward health care? I think the answer to that is no," Schieffer. "But I think the other part of it is she's very likeable, people like to see her, and like chicken soup, I think it can't hurt."

The first lady's debut in the health care campaign coincides with the president's media blitz this weekend. He's pushing health care reform on five talk shows this Sunday - that'll be a presidential first - adding to the 66 TV appearances and 157 speeches in which he's already campaigned for a reform plan.

Among the programs on which the president will appear on Sunday is CBS' "Face the Nation."

"The administration is convinced [the president] really is the best salesman that they have and they want to put him out there," said Schieffer. "They think he can sell it if anyone can sell it."

And with regard to the president's media blitz, Schieffer said that despite rising public approval of his plan, "he hasn't made the sale yet. Even though the polls showed a little more favorability after the speech [to Congress], a majority of people are still worried that it will cost more, especially to the middle class. They're not convinced that it's going to do what he keeps arguing that it's going to do.

"So maybe he's been out there too much, maybe he hasn't," said Schieffer, "but there's still some selling to be done if he's going to get something here."

"It is a fractured media environment, and presidents - like everyone else - have a tough time piercing the public conscientiousness," political analyst Larry Sabato. 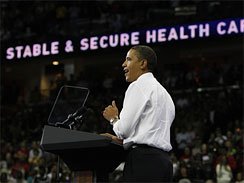 (AP Photo/Charles Dharapak)
(Left: President Barack Obama speaks at a rally on health care reform, Sept. 17, 2009, at the Comcast Center at the University of Maryland in College Park, Md.)

But is the president running the risk of overexposure?

"Common sense would tell that you if a president is on all the time - if it's 'all Obama, all the time' - then probably people will tune out some of the message," Sabato said.

And some of them will never even see it - the president is skipping Fox News this coming Sunday.