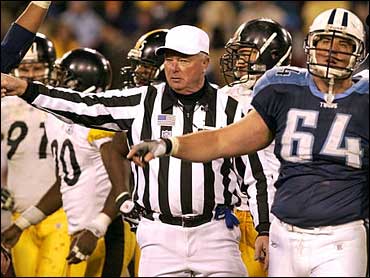 The men wearing stripes are getting all the attention on NFL fields these days, thanks to a series of blunders and questioned calls at the most important time of the football season.

Forget Donovan McNabb and Warren Sapp, the stars who get paid millions to score touchdowns or stop them. The talk leading up to the Super Bowl is all about the little guys who throw little yellow flags.

And with the conference championships this weekend, owners, coaches and players hope the focus can return to the game.

"There's no automatic cure for the officiating," Baltimore owner Art Modell said. "They're human and the players are human, too. They all do the best they can."

Officiating disputes are a weekly rite during the National Football League season and intensify during the playoffs. But because commissioner Paul Tagliabue publicly criticized officials, this year's debate is even louder.

Just a year ago, the obscure "tuck rule" helped New England beat the Oakland Raiders in the second round of the playoffs when an apparent fumble was ruled an incomplete pass late in the game.

The Patriots went on to win the Super Bowl and the Raiders are using what they still consider a terrible call to motivate them on their own run to the Super Bowl.

They host the Tennessee Titans on Sunday for the AFC title, and the Tampa Bay Buccaneers play the Eagles in Philadelphia for the NFC crown. The winners play for the championship in San Diego on Jan. 26.

In an unusual admission, the league said officials blew a pass-interference call at the end of the Jan. 5 playoff game between the New York Giants and San Francisco 49ers. The Giants would have had one more play to try to win the game if the call had been made.

Tagliabue said it was the worst "failing" in his 13 years on the job.

"With the benefit of hindsight, it seems the decisions were made with less than full information, and that's very disappointing," Tagliabue said.

Others believe the officiating is just fine.

"Every once in a while there are a couple of guys that make me go take a couple extra Tylenol," Tampa Bay coach Jon Gruden said. "But most of the time, I'm all right."

"I think right now it's probably as good as it's been," said Fisher, co-chairman of the league's competition committee, which reviews rule changes. "We've had some difficult calls here in the playoffs, but there have been difficult calls throughout the years."

Fisher was on the sideline last weekend when his team kicked the overtime field goal to beat Pittsburgh 34-31, leaving Steelers coach Bill Cowher furious. He charged after referee Ron Blum to protest a penalty that gave the Titans a second shot at the game-winner.

Earlier in the game, Blum acknowledged he had to check with supervisors to confirm that a certain play was subject to an instant-replay review. League officials said Blum made the right calls but were embarrassed he had to double-check the rules.

Everyone from fans to talk-show hosts to owners have proposed officiating changes. Some people want to use instant replay more, while others would like more officials on the field and insist they should not be part-time workers.

The officials have other jobs during the off-season. They are teachers, lawyers, accountants, dentists, doctors, businessmen and salesmen. Blum is a golf pro.

During the season, they are banned from talking to the media except to discuss specific calls with pool reporters after games.

Any changes to officiating will be decided at the owners' meetings in March.

"I think we've got to take a hard look at it," said Oakland defensive end Trace Armstrong, president of the players' union.

"What we're seeing more and more of is games coming down to one play, a turnover or a penalty. So the margin of error between winning and losing is so slim that it places an added burden on referees."