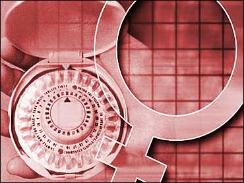 As the pill turns 50, a host of commentators are dissecting the impact that it's had on society. Now comes a study suggesting that oral contraception may also have had an inhibiting effect on the female libido.

That controversial finding was offered in a paper published by the Journal of Sexual Medicine and based on a survey of 1,086 German female medical students.

Most of the participants reported having used oral contraceptives while nearly all had been sexually active in the previous month. (80% reported being in stable relationships.")

The study found that "hormonal contraception" (i.e. the pill) was associated with lower desire and arousal scores when compared with other contraceptives. (Note: the definition of sexual dysfunction used in the study extended to feelings of diminished desire and reduced interest in sexual fantasies, arousal problems (mental and physical), inability to achieve orgasm, and pain associated with vaginal penetration.)

At the same time, the authors were careful not to draw a direct causal relationship between the pill and lower female libido. For one thing, the researchers were not working with a control group. They also were only able to compare their findings to prior studies. One last reason to hedge their bets: the investigation was targeted at medical students, so the age range of people participating in the study was limited.

Still, there was enough evidence for Journal of Sexual Medicine Editor-in-chief, Dr. Irwin Goldstein, who is also director of sexual medicine at the Alvarado Hospital, University of California, San Diego, to offer this cautionary note: "When you fool around with your sex steroid hormones, you gamble with your sex life," he said. "The value of this paper is to remind us that 300 million users of the pill (worldwide) are putting themselves at risk (of sexual changes), with extremely limited informed consent that this is happening."