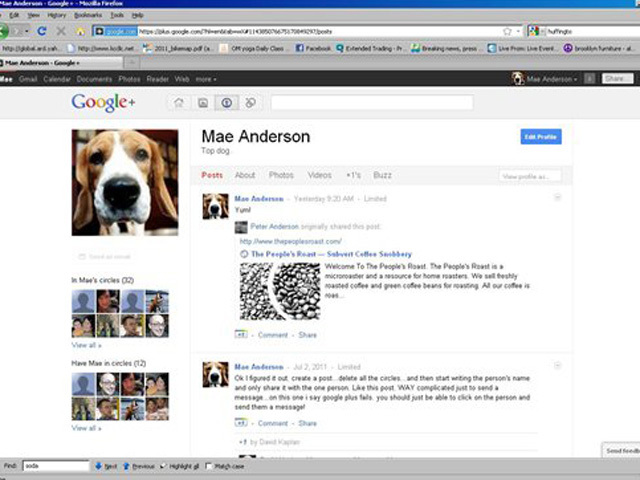 NEW YORK - Google didn't build its new Plus service simply to have an online hangout like Facebook.

Rather, Google's new social-networking endeavor is about trying to gain valuable insights into people's lives and relationships. This could help the company do a better job of targeting ads so that advertisers would pay more and have less reason to spend their money on Facebook.

If it succeeds, Plus represents Google's best shot yet at muscling into a market that has threatened to topple the Internet search and advertising leader, as Facebook leads the way in making the online world social.

Plus is Google's carefully scripted venture into a territory where its previous efforts have been duds.

On the surface, Plus is reminiscent of Facebook - with a Google touch. It lets people share photos and status messages, chat with friends and acquaintances and follow news updates. A prominent feature called circles allows users to organize the people they interact with into groups, such as family, close friends or fishing buddies. Users can choose to share things only among certain circles.

Google Plus is still in a restricted, test phase, and invites to join are highly coveted. Only time will tell if it takes off among the broader public or if it's too little, too late to face off with Facebook and Twitter on the social front - just as Microsoft has failed to surpass Google in search with latecomer Bing.

Google Inc. has done quite well without its own social network. Its online search engine accounts for two-thirds of queries made in the U.S., and even more in parts of Europe. Its revenue is expected to surpass $36 billion this year, the bulk of it from text ads that appear alongside search results and other Web content. Google reports its latest quarterly results Thursday.

Online behaviors are changing, though. People are spending more time on Facebook and other social networks. They are increasingly relying on their friends' recommendations when deciding where to eat and what movies to watch.

Google, meanwhile, has bungled past social media efforts. A sharing program called Wave was quickly killed off because users didn't know what to make of it. Buzz, a later venture, was the center of a privacy fiasco. Google had been too aggressive about automatically creating circle of friends, which inadvertently revealed whom they've corresponded with on Gmail.

Early response to Google Plus has been positive. But that's no guarantee for broader success. As Google botched one social media effort after another, Facebook grew exponentially.

Today, half of Facebook's 750 million worldwide users log on to the site every day. That's roughly the entire population of the U.S. and U.K combined. More than 250 million people engage with Facebook in some form on outside websites each month around the world. They do this by clicking the ubiquitous "like" and "recommend" buttons on news and other sites or by logging on to websites using their Facebook passwords.

Google's chairman and former CEO, Eric Schmidt, has acknowledged that the company failed to respond to Facebook's threat fast enough. His successor, Google co-founder Larry Page, has made social networking one of his top priorities since he took over in April.

"We don't think it's a coincidence that (Google Plus) was introduced less than three months after Page returned to the CEO post," said Standard & Poor's equity analyst Scott Kessler in a note to clients.

Facebook's greatest advantage is the immense trove of information that its users have shared about themselves through about 4 billion posts and connections they make collectively every day. Facebook knows what people are reading, eating and watching. It knows who's friends with whom, and which friends people trust for recommendations on what shoes to buy and which plumbers to hire.

Google can't index most of this information on its search engine because Facebook doesn't share it. Instead, Facebook has formed a search partnership with Google rival Microsoft Corp. In May, Microsoft's Bing search engine started to use information from people's Facebook preferences to tweak its search results. This means Facebook users who search for shoes or concert tickets on Bing might get results that are tailored to the interests they listed on the site. For people who aren't logged on to Facebook when they search, Microsoft's search engine might still emphasize links that other Facebook users have recommended.

That puts Google at a disadvantage. Unless it can get similar data through a social service of its own, Google is left with a formula that sorts through the pattern of Web links and other computer data to determine where a site should rank in its recommendation. The system has become increasingly vulnerable to manipulation by websites looking to rank higher than their rivals. As a result, Google search results might not be as useful as recommendations drawn from an analysis of what they have already signaled that they like by pressing a Facebook button.

There's another key way that social data can help Google.

On Facebook, companies can target their advertising with razor-sharp precision given all sorts of information that people willingly share, such as a preference for Coke over Pepsi or whether they've ever been married. For example, they can show a particular Cheetos ad only to single men aged 17 to 41 who live in New York, are Yankee fans and enjoy the "World of Warcraft" video game.

Advertisers are typically willing to pay more for such targeting because they'd be pitching to consumers most likely to buy. Google does a good job already of targeting ads based on what people search for, write about in emails and watch on YouTube. Social data could help Google do even better.

Danny Sullivan, who follows Google closely as editor-in-chief of the website Search Engine Land, said that if Google Plus succeeds, Google would get "a good insurance policy" amid the rise of social networks.

The need for it became apparent when Google's deal to include Twitter updates in its search results expired recently, Sullivan said. Google has temporarily shut down its "RealTime" search feature, though it told users to stay tuned while it explores how Google Plus will figure into it.

That said, Google Plus doesn't necessarily need to be a Facebook clone.

"Google needs to have a social strategy that is relevant to Google and the way people use Google applications," said Susan Etlinger, analyst at Altimeter Group. "That's very different from how people use Facebook."

Facebook is, for now, an online hangout above all. People go there to scan status updates, chat with a friend or look at the latest photos, without necessarily having something specific in mind.

With Google, people usually have an objective, whether that's searching for a hair stylist or sending an email about an upcoming party. Google's task is to make its existing products social as "social" becomes the norm for online activity, she said.

"Eventually everything is going to be a social network," Etlinger said. "Social capabilities will be in everything on the Web."