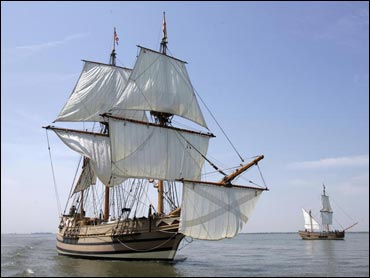 To get the real story about our nation's earliest days, you need to look well beneath the surface in Virginia along the James River.

"Under that, you go back over 250 years and you get to the 1607 level," says archeologist William Kelso, as he leads CBS News correspondent Joie Chen on a walk over dirt from that time.

Kelso has pulled from the sandy soil one million pieces of evidence from the first permanent English settlement in the Americas.

Make no mistake, this was not Disney's version of Jamestown with its singing Pocahontas and tow-headed John Smith.

Before you go to Jamestown…

See our Quick Guide To Virginia 2007

Get the scoop on Royal Visit Activities

There was a Pocahontas — daughter of the great Chief Powhatan — and there certainly was a John Smith. But that story we learned as kids about how she begged her father to spare the dashing English captain, his gratitude blossoming into Colin Farrell's steamy big-screen moment in "The New World," is hogwash, according to historian James Horn.

"It's wrong," Horn says. "And there's no other way of putting it ... it's a popular story that people would like to believe — that they fell in love. They were both powerful, headstrong characters."

The real story is that John Smith's headstrong, arrogant, take-charge personality perfectly fit the huge and perilous mission to the New World.

Captain Eric Speth commands replicas of the three ships that sailed from England. He describes a brutal voyage.

"It could be described like being in a dark closet," Speth says. "Being tossed about and being subject to seasickness."

104 men and boys made the crossing. They had come for gold and other riches, but the New World was hardly the Promised Land. Starvation, disease and skirmishes with the Indians left more than half the group dead.

"By the end of the year, there were less than 40 — about 38 settlers still surviving here," Horn says.

What saved those survivors was a measure of luck — and the audacious John Smith. Despite his youth (he was just 27), Smith bullied the settlers to keep them going. "Work," he warned. "Or don't eat."

And here's where the real Pocahontas comes in. Scholars think John Smith learned the Indian language from her, which helped make him powerful enough to barter with them.

"And he really becomes the indispensable man," Horn says. "He's the one that goes off and trades with the Indians to get corn ... he's the one who develops a relationship with the great chief of the Powhatans, so more food can be delivered to the colony."

Of course, Pocahontas' tribe had ideas of their own. Instead of killing off the settlers, they, too, wanted to barter — for weapons.

"They're both trying to figure out the best way of exploiting each other," Horn says. "And that explains why the Indians kept the English alive for as long as they did."

And despite some fierce battles, archeological evidence shows the Indians were, to some degree, a part of daily life in the Jamestown settlement.

The settlement not only survived, it ultimately thrived, complete with a fledgling representative government. But dig deeper, and you'll find a darker legacy.

"We found they were making tobacco pipes," Kelso says. "And then we found the tobacco seed — intact tobacco seeds — down in the bottom of a well."

Tobacco was a cash crop, and while it would be the settlement's economic salvation, it also sowed the seeds of slavery. The first Africans arrived — against their will — in Jamestown in 1619.

And as the colony grew and prospered, the region's Indian tribes were decimated. Ultimately, the 15,000 Powhatans dwindled to just a couple thousand.

"This is a story, warts and all," Horn says. "There are heroics — there are epic stories here — but there's also stories of greed and hostility, racism."

It's that complex history — the messy story of what really happened at Jamestown — that's finally getting its due and challenging us to consider what might or might not have been had those 104 souls not braved the challenge of coming to America.