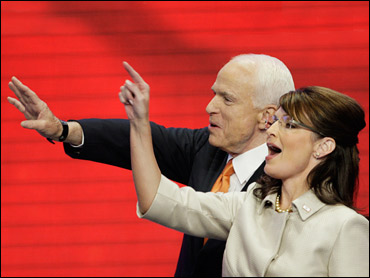 It took Conservatives in Great Britain a decade to restore their party's good name. It is taking Republicans a far shorter time--perhaps only two years--to begin a significant comeback. Who's responsible? For sure, John McCain and Sarah Palin have played major roles. But so has a Republican who was one of the causes of the party's decline--President Bush.

Republicans suffered from the same ailment as the Tories. In the minds of millions of voters who once supported them, Republicans had become the political equivalent of socially unacceptable people. They were disliked, personally as well as politically. Republicans had no one but themselves to blame.

The Tories lost three elections before changing the face of their party with new leaders who stressed fresh issues (while muting but not abandoning their core conservative principles). In 2006, Republicans lost Congress and numerous statehouses. Now McCain and Palin have supplanted President Bush and Vice President Cheney as the party's leaders. They're stressing a pair of new issues: political reform and fixing a "broken" Washington. Actually, those may be a single issue.

Voters have responded to that and other Republican changes. Aside from an election, the best test of how voters feel about a party is whether they regard it and its leaders favorably or unfavorably. As recently as last June, an NBC/Wall Street Journal poll found voters with a 28 percent positive/47 percent negative attitude toward Republicans. By September, after the Republican convention, that had changed to 40 percent positive/43 percent negative.

Other polls have registered a similar improvement. According to Pew Research, half of America's registered voters have a favorable opinion of Republicans (55 percent are favorable to Democrats). Among independents, Pew found that 50 percent look positively on Republicans, 49 percent on Democrats--a gain for Republicans of 18 percentage points since August.

As remarkable as those poll numbers are, they're just that, poll numbers, not election results. But they do suggest that Republicans are no longer the pariahs they were in 2006 and indeed earlier this year. That alone is an accomplishment.

"The Republican brand had taken a huge hit," says Neil Newhouse of Public Opinion Strategies (POS). "The convention helped change the brand of the party from George Bush to John McCain."

In a POS survey in September, Bush's approval rating improved to 35 percent. McCain, however, has a favorable rating of 56 percent (Barack Obama's is 54 percent). And Palin has the highest rating of any vice presidential pick since Bill Clinton chose Al Gore in 1992. She and Gore tied at 47 percent.

Palin is not only viewed more favorably than Joe Biden, Obama's running mate (40 percent), in an NBC/WSJ poll, she towers over the only other woman chosen to run for vice president, Geraldine Ferraro. Ferraro's average rating in September 1984 was 29 percent.

These poll results show one thing clearly: Popular leaders with a (partly) new agenda and new talking points are driving the improvement in the Republican image. But this effect, hyped by the successful convention, may fade, at least a bit.

Other factors have also been crucial in the Republican rise. Recall what caused the party to tank in 2006: corruption and scandal in Congress, excessive spending, a losing war in Iraq, unpopular leaders. The party had a bad odor.

Those problems either don't exist any more or aren't as significant in 2008. Congressional Republicans who were caught up in scandal or outright crimes are gone or soon to leave. The one exception is Senator Ted Stevens of Alaska, who is under indictment and awaiting trial as he runs for reelection. Yet he's running even with his Democratic opponent.

Republicans haven't cured their addiction to earmarks, which have become the symbol of wasteful spending in Washington. But their new leaders are on the right side of the earmark issue. McCain has long opposed earmarks, and Palin, as Alaska governor, gets credit for killing the most egregious earmark of all, the infamous Bridge to Nowhere in Ketchikan.

In Iraq, the course of the war has been reversed and victory is now in sight. The public still believes, by roughly a 2-1 margin, that the war was a mistake. But the vastly improved situation in Iraq has made the war far less of an issue than it was in 2006 and far less of a drag on Republican candidates.

Republicans aren't close to reaching the enviable position of the Tories. Polls in England have consistently given the Tories nearly a 20-point lead over Labour for months. Conservatives won a landslide victory in local elections last May. A national election may not come until 2010, though it could be called earlier.

While McCain may win the presidency, Republicans aren't likely to recapture either the Senate or the House. Their aim is to cut their losses--to fewer than 10 in the House and 3 or 4 in the Senate--and hope for better times in 2010. With their new and improved brand, they have at least a shot at this.

It may seem far-fetched, but President Bush has helped. As Democrats have tried to tie McCain to him, Bush has mostly stayed out of the limelight. And then there's the surge in Iraq. Had Bush not ordered it, the situation in Iraq would probably be a bloody mess and an American defeat. And Republicans would still be suffering.

By Fred Barnes
Reprinted with permission from the Weekly Standard