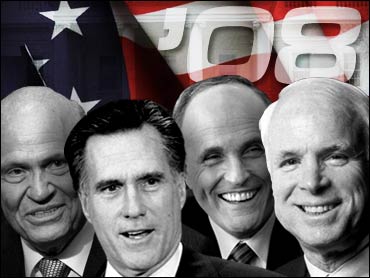 This column was written by Michelle Cottle.

This comes less than two months after an Iowa field operative for Brownback was busted for sending out an e-mail talking trash about Mormonism, the faith of choice of rival Mitt Romney.

And that episode occurred only a couple of weeks after Rudy Giuilani's deputy web-campaign manager helpfully sent a blogger an article from the Utah media that tied Romney to a whacked-out prophesy asserting that a Latter Day Saint will save the Constitution.

Before even that, there was the April incident in which John McCain's campaign chairman in Warren County, Iowa, took it upon himself to share a number of illuminating tidbits about the Mormon Church (it funds Hamas, it supports Taliban-like treatment of women...) at a monthly meeting of GOP activists.

And, of course, who could forget Focus on the Family founder, conservative kingmaker, and unofficial Newt Gingrich shill James Dobson's March pronouncement that actor, lobbyist, and former Senator Fred Thompson is not a real Christian? (Culturally conservative, yes. But on the road to hell nonetheless.)

This, in turn, spurred protestations by Thompson's camp, who cited their man's lifelong standing as a Church of Christer. But that only served to spark Web debate about whether Thompson is a member of the fundamentalist Churches of Christ (as he reportedly professed) or of the more liberal United Church of Christ, in which he and wife Jeri were married in 2002. One political science professor at a Church of Christ-affiliated college went so far as to issue an online challenge, offering $100 to anyone producing evidence that Thompson had attended an assembly of the conservative sect in the past 20 years.

Wow. Talk about a tough crowd. I realize this is a religious nation, and that, more specifically, the GOP has been in hock to Christian conservatives for several elections now. Plus, the "value-voter" hysteria spurred by the 2004 exit polls has even Democratic presidential contenders brandishing their basic spiritual bona fides this time around. But the sectarian skirmishes on the Republican side are getting so vicious it's unclear whether St. Peter himself would be pure enough to escape unsullied. At this point, it wouldn't surprise me to learn that one of the more desperate campaigns had focus-grouped the idea of hosting a combination pig roast/auto-de-fé at next weekend's straw poll.

OK. I would be surprised. But not shocked.

What exactly is going on here? Sure, Mitt Romney's Latter Day Sainthood is creeping out some of the base and so makes for an irresistible target. But what of the heavy breathing over Thompson's Jesus credentials or, weirder still, Brownback's — a man so ostentatiously devout I feel the urge to genuflect every time I see him on C-SPAN. The answer to this puzzle lies in who most notably is not getting tarred in this religious war: Rudy Giuliani. I mean, if Thompson's degree of protestant zeal is of concern to a single soul, one might reasonably expect the serially unfaithful, thrice-wed, pro-gay, proudly pro-choice New Yorker — quite possibly the shabbiest Catholic in the history of the modern church — to be burned in effigy daily by the party's wingnuts.

But for now, it seems the ideologically heretical Giuliani is regarded as an entirely different animal, and so the rest of the pack is busy jockeying to be the base-friendly non-Rudy in this race. I mean, why bother picking on Giuliani's spiritual shortcomings when America's Mayor is already taking a beating for the full range of his noxiously liberal views on conservative websites like Redstate.com and RightWingNews.com? Best to set yourself up as the conservative alternative and hope that eventually Rudy goes the way of the once formidable, now barely conscious McCain campaign.

Unfortunately for the competition, there just aren't that many red meat issues by which to starkly distinguish oneself from the pack. Most everyone in this group (thanks to a few strategic adjustments by Mitt in recent years) opposes abortion and gay marriage, loves guns, and cannot wait to round up America's 12 million illegal immigrants and send them home in cattle cars. As for the war on terrorism, it's hard to get to the right of Rudy, whose entire candidacy is based on his swaggering machismo and endless reminders that he is the Big Dog who helped New York survive 9/11. Mitt Romney took a stab at out-toughing Rudy by sharing with us his presidential dream to "double" Gitmo. But since even George W. Bush is talking about disbanding the facility, Romney's grand plan doesn't make him look manly so much as confused.

This is not to say that there aren't plenty of policy differences between the guys battling for the base. But we're talking here about pressure points that play on a visceral level with the God-fearing grassroots — meaning the issue needs to involve sex, drugs or rock n' roll. Barring that, the only thing left is to play the God card. Most of the electorate will snigger and roll their eyes and dismiss it as empty pandering. But many of the GOP faithful will know exactly what you're talking about and will share your doctrinal concerns. (As noted, the Southern Baptists' chief political spokesman and Fred Thompson groupie, Richard Land, has been lecturing Mitt Romney about the need to publicly address his Mormonism if he wants to win over evangelicals.)

Such divinely inspired whispering may not be enough to dramatically alter the landscape. But these guys are short on options. And at least the strategy makes for entertaining politics, as the rest of us sit back and watch the party of moral purity kneecap its own candidates in the name of God.
By Michelle Cottle
If you like this article, go to www.tnr.com, which breaks down today's top stories and offers nearly 100 years of news, opinion and analysis