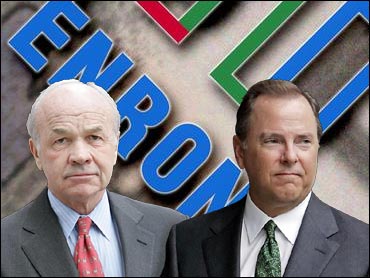 This column was written by William Greider.

Normally, I am a "bleeding heart" when it comes to long prison terms, but an appropriate sentence for the Enron boys might be six trillion years. Kenneth Lay with his million-dollar smile and Jeffrey Skilling with the cold, confident eyes of a viper made their company into the symbol and showpiece for a glorious era. It was the hyper-modern and market-efficient "new economy," in which the concept of wealth falling out of the sky became briefly hip and widely believed in respectable circles.

Enron led the way. Lay and Skilling showed us how it's done. And when Enron fell, the great national delusion turned to catastrophe. Unwitting investors lost $6 trillion overall. Millions of innocent bystanders lost much more in terms of their lives. So let Skilling and Lay now serve as symbol for the shame of modern American capitalism. Let these guys do the time for all those others, the corporate titans and financial con men, who got away.

Justice sometimes proceeds in strange ways. I am opposed to public hangings and other forms of scapegoating, but perhaps this time we need a spectacular ritual sacrifice to amplify the point made by that swift, sure conviction in Texas. These men in the good suits are criminals — criminals! — who must be made to set an example for all ambitious people who toil in business and finance.

These two thugs looted pension funds and destroyed the personal savings of families. They stole money from the rest of us, not to mention from government and other non-glamorous business enterprises. They rigged energy markets to drive up prices and bilk defenseless consumers (an old-fashioned swindle borrowed from nineteenth-century robber barons and newly decriminalized by deregulation). They swallowed viable, productive companies and wrecked them, especially wrecking the livelihoods of their employees. And, worst of all, they were best pals with politicians and political leaders as well as the most prestigious names in banking and finance — connections the Mafia would die for!

Sorry, am I shouting? My exuberance over this verdict is a mixture of joyous fulfillment and lingering doubts about the impact. Since the meltdown of the stock market in 2001 and the avalanche of scandalous revelations that followed from hundreds of corporations, I have thought the political system and the financial system and even the public at large did not sufficiently get the message. The pervasive rot in American capitalism is much deeper than acknowledged. The various forms of fraud by which millions of people are separated from their money continue in practice, often blessed by law itself.

Still flourishing, likewise, are the leading Wall Street firms — Citigroup, Merrill Lynch, JPMorgan Chase, to name a few — that showed Lay and Skilling how to do the fancy financial footwork, converting "debt" into "revenue," so that stock analysts could tout Enron's rising "profit". This was fraud too, but nobody from the banks went to prison (they paid millions, even billions, for no-guilt settlements with government and injured investors). Message to America: Don't rob the 7-Eleven with a six-gun. Rob the general public with pen and computer.

Congress, meanwhile, claimed to "toughen" financial laws, but they did not get reform halfway done. Now the Chamber of Commerce and other front groups are back in Washington insisting that the rather mild reform measures be scrapped, too. They may very well succeed, if the public is not aroused. The media can take care of that. They will be describing this verdict as "an end of the era."

Wrong again. The era of corporate corruption, financial swindling and blue-sky illusions is not over. The players are merely paused, waiting for the marks to re-enter the casino. Perhaps Kenny Boy's conviction will remind people that the game is still fixed and those guys in good suits are the dealers.

By William Greider
Reprinted with permission from The Nation