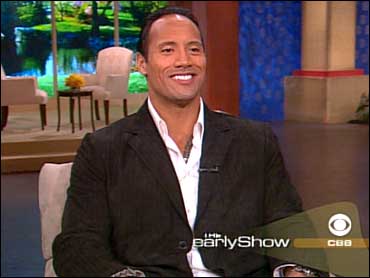 The new movie "Gridiron Gang" is about a group of teens who land in a detention camp where one man, played by Dwayne "The Rock" Johnson, takes a chance on them.

Johnson dropped by The Early Show to chat about the true story the movie is based on, his own troubled past and spreading a positive message.

The Rock's conversation with René Syler.

Syler: One of the things that makes this film so popular is that it's based on a true story — it's about Sean Porter. Tell us about him.

This is a guy who is a true hero. He wakes up every single morning and goes to a place that, quite frankly, a lot people don't want to go — a prison for kids. Still to this day he oversees five prisons for kids.

He wasn't asking me, "When are we going to go on the The Early Show together?" His concern and his main focus was to say, "Listen, not as an actor — I know you're going to get my essence as an actor — but my world, and the world that these kids come from, it's vital that you tell it truthful in its authenticity." It's dark, violent and gritty, but you also have to be positive. And if you do that, then we win.

Syler: The movie is based on this 1993 documentary. He puts together a football team of these guys (who) were enemies on the streets of South Central Los Angeles. They have to learn how to work together as a team, and they do very well, don't they?

The Rock: They do a great job. That, to me, is what makes it special. That's why the story resonated with me.

These kids at 13, 14, 15 years old — they make this statement that even though we are locked up, we're not going to be called losers. We want to become the kind of men Sean Porter wants us to become. Good men, good fathers, good dads.

That's powerful to me. And it wasn't easy. They get their butts handed to them a couple of times and then go on to have this champion season.

Syler: In your young life you were headed down a path that was not so promising at a time. You were arrested several times before you were 17 years old. Did you have someone like a Sean Porter come no your life and straighten you out?

The Rock: I did. I was really, really lucky that I had multiple arrests by the time I was 17, and I was one these kids. I could have easily been locked up.

I did have somebody in my life like a Sean Porter — my arresting officer, as a matter of fact. When I was 14 years old, he said, "You're going to stop screwing up, and I want you to go play freshman high school football for your team."

I didn't listen. I continued to get in trouble.

I had a great high school football coach, but more importantly than all that, I had a consistent love and home, with my mom and dad, which carried me through, and I appreciate that.

Syler: You guys filmed on location at Camp Kilpatrick for about six weeks. What was that like? Did you have (interaction) with the detainees?

The Rock: We did. Every day I would talk to these kids, and it was motivating for us.

You know, those kids have the big "B-S" barometer, and they can smell fragrance from a mile away, whatever it is. And so, I would tell these kids, use me as an example. I was arrested, 13 to 17, multiple times.

But here's a movie that we are making about your life, and it's real — there's no B-S. This is real.

The kids before you that got out — some are serving life, some have died — but a lot of them got out and became good people, good men.

And it was motivating. Their eyes were wide, they were really listening.

Syler: Well, yes, because The Rock is telling them to get there act together. You do a lot of speaking to students, also. What do you say to them?

The Rock: What I say to students — and we're talking about kids who aren't necessarily locked up — but what I tell kids is a couple of things like, you kids have a power, there's a certain power you have.

And they say, "What power do we have?"

Hard work pays. There's no substitute for hard work, nobody is going to give you anything for free.