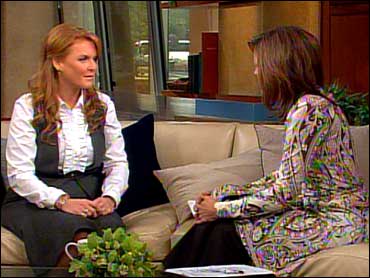 Imagine looking at the morning newspaper and discovering that 83 percent of the population would rather sleep with a goat than sleep with you.

Or what if people made your name synonymous with a pig?

Well, for a while there, life was a barnyard nightmare for Sarah Ferguson, the Duchess of York. The state of her figure seemed to draw more attention than the state of the British empire.

But all of that appears to be in the past for Fergie, who dropped in on The Early Show Friday for a cozy chat with co-anchor Hannah Storm.

The duchess is embarking on her 10th year as the U.S. spokesperson for Weight Watchers. She reached her goal weight in December 1997 and has been able to keep it off ever since.

Ten years ago, when Ferguson came to the United States to start working with Weight Watchers, she was a single mother, almost bankrupt and physically not in good shape.

"It was like a rowing boat arriving on the beaches, an empty vessel," Fergie recalls. "And when I got here, the American people embraced me. I thought, 'I can't go onstage. Everyone will think I'm awful and I'll let everybody down.' "

She says that whether or not she works as a spokeswoman for Weight Watchers, she will always be with them because they are "the people who supported me the last 10 years."

When Storm brings up the days when she was "hammered" by the British press, Fergie is the first to speak the nickname they gave her:

"The Duchess of Pork."

So Fergie was dealing with the everyday issues that most women have to face, and the reflected spotlight that shone so brightly on her famous sister-in-law, the late Princess Diana. But her struggle with weight began long before, when she was 12 years old.

"I became a compulsive eater when Mom left to live in Argentina," she explains, "because I thought it was my fault and I never asked her. You know, when you are that young, you really do think it's your fault. So it wasn't until I understood 10 years ago that I was doing that, that I started to change my own life. Very interesting."

The weight-loss experience for Fergie, then, meant more than healthy eating and exercise, and she talks about the "embrace" of fellow Weight Watchers as an essential part of the program for her.

"Free your mind and your bottom will follow," she concludes.

It should come as no surprise that the duchess firmly supports the crackdown on models who are far too thin.

"I thought, 'Excellent!' " Fergie says flatly. "We cannot go on expecting … They (young girls) want to look like all these models and actresses, and it's unrealistic. It's got to be healthy. You know, really, my girls, when I talk to them, I just go, 'You know what? You have just got to try to understand. I know you want to look like all these people, as everyone else does, but understand maybe they have issues, too. That's why they are so thin.'