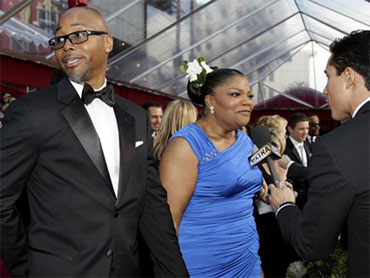 The excitement of Hollywood's biggest night begins the moment the stars arrive at the Oscars, red carpet-ready.

All the biggest stars, from Sandra Bullock to Gabourey Sidibe, Meryl Streep to Mo'nique, dazzled Sunday night as they sashayed down the carpet. But it wasn't just about looking good. What did the stars have to say about the Oscar experience?

Mary Hart, the host of "Entertainment Tonight," dished on "The Early Show" about what the stars said on Oscar night, from food to fashion.

Photos: Oscar Red Carpet
A List of Oscar Winners
What You Didn't See on TV

Sandra Bullock, who won for Best Actress for "The Blind Side", joked that she'd often been referred to as a horse in the Oscar race.

Meryl Streep, who was nominated for Best Actress, said the experience is always "overwhelming."

She said, "I get more and more nervous because I know what's coming."

Jeff Bridges, who won for Best Actor, told "Entertainment Tonight," he was sleepy on Oscar night.

He said, "I think I have a touch of narcolepsy because at times of great excitement, I'll get a little nod going, so I'm feeling a little sleepy right now."

For others, walking the red carpet was a novel experience.

Christoph Waltz, who won Best Supporting Actor for his role as a Nazi officer in "Inglourious Basterds," it was all about the carpet.

He told "Entertainment Tonight," "This is the first of the Oscar carpets, but I have a carpet at home."

"I'm excited but a little confused by it all," she said.

But the frontrunners kept their cool.

Best Director winner Kathryn Bigelow, said she was having a "surreal" and "phenomenal" evening.

"Avatar" director James Cameron said his movie was so celebrated already, so any additional laurels would just be a bonus.

Best Supporting Actress winner Mo'Nique said the anticipation of reading the winners is a normal feeling that you do at all the awards shows.

She explained, "You do that in fifth grade when you were up against (other kids) to get the band part for saxophone, and you had to wait for them to call that person."

Hart said the Oscars aren't just about films, it's also about the food.

Tina Fey, a presenter at last night's awards, said she prepared for the day with a huge breakfast of eggs and sausage. She added she stashed candy "all over" her husband.

Penelope Cruz said for awards shows you have to learn to eat in the morning.

But for the guys, it's a little easier.

Matt Damon, nominated for Best Supporting Actor, said he ate pasta for lunch and then threw on his tux five minutes before he had to leave.

On "The Early Show," Hart said George Clooney created another interesting moment on the red carpet. She said even before passing through security, Clooney stopped to sign autographs and then jogged along the chain link fence, high-fiving cheering fans.