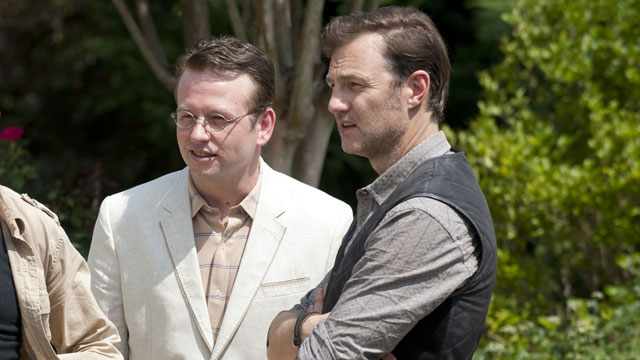 Sunday nights must present a programming problem for Dallas Roberts since his two most high profile TV gigs air opposite one another. Thankfully, behind the scenes, both shows have been incredibly generous when it comes to scheduling Roberts' time, ensuring he can continue to breathe life into both Owen Cavanaugh ("The Good Wife") and Milton Mamet ("The Walking Dead").

With Alicia Florrick's brother currently off on one of his adventures (although Roberts believes Owen will be seen again before this season wraps up), I fully focused on "The Walking Dead" when chatting with Roberts yesterday. In addition to weighing in one where Milton's true loyalties lie, Roberts reveals what fans can expect from the finale.

ETonline: I can't think of two shows more opposite than "The Good Wife" and "The Walking Dead." Was there an adjustment period in transitioning between the two?

Dallas Roberts: [laughs] I think going from "Downton Abbey" to "The Walking Dead" might be the only thing that could be more different. But the thing that attracts me to both is the character-driven writing. That's where I feel the most at home as an actor and I think that because we're spending more time with all the characters this season, "The Walking Dead" is giving us more and more character development. You start to feel like they're a part of you, so you start to feel the fear yourself when they're in danger of dying. That's the great thing about longform television -- when the stakes are raised, you really feel a part of it yourself.

ETonline: I've always felt that, for all his work on a cure, Milton doesn't mind that there are less people on planet. Like he'd stay locked in his lab all the time if he could.

Roberts: I love that exact thing about him. I love that he's afraid of the people who are alive almost as much as he's afraid of the people who are undead. The danger for him is really in social interactions. Those are almost as scary for him as being out in the woods alone. I think that puts him in situations where he's living for his singular version of "The Walking Dead" and that's fun to play.

ETonline: Is that why you think he's so loyal to The Governor; he provided Milton a safe space amid all this insanity?

Roberts: I think The Governor commands respect and power with force and brutality and whatever is necessary. I don't think Milton wants to get into fisticuffs with the guy, but they're passed that. They've lived together a while and built Woodbury from just a group of survivors to a thriving town. Milton will never be the top dog, but The Governor allows him to eat the scraps from the Top Dog's table. If we're the United Nations, The Governor is America and I'm England.

VIDEO - "The Walking Dead" must (re)watch scene of the week

ETonline: So you weren't surprised to see him pick The Governor over Andrea last week, even though he kind of felt like The Governor was being unreasonable?

Roberts: I fought quite hard in the beginning for my character to not treat Andrea with any sort of deference or respect. I figured she couldn't be the first hot, young female who has been taken under The Governor's wing. Milton views her, at the beginning, as someone who will be around for a couple of weeks before being traded in for the newer model. But then the thing with Mr. Coleman happened and she proved that although they're of opposite beliefs, she was a worthy opponent. Now, Milton is really struggling with reporting to The Governor and doing his bidding while feeling a sense that Andrea has something else going on. Walking that line becomes increasingly difficult for Milton.

ETonline: Given all of that, do you think Milton would lay down his life to protect Woodbury?

Roberts: I think so. I think once you have a rational human being who can understand the idea of sacrifice for the greater good, that person would lay down his life. I don't know if he will or will not, but it poses interesting questions about what happens once you've allowed people to flourish in awful situations.

ETonline: Lastly, the season finale is almost upon us. How do you think fans will react to it?

Roberts: "The Walking Dead" fans will not feel cheated by the finale. It's not a soft close for sure. As [the season] starts to wrap up, it gets stronger, crazier and weirder. Although you'll never see it coming, when it cuts to black at the end of season three, there will be millions of mouths agape.