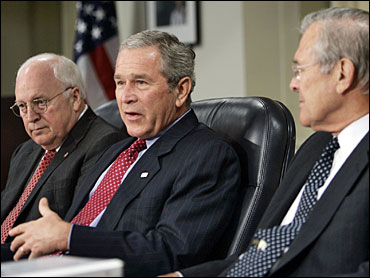 
White House personnel lineups generally lose their all-star quality by the last 18 months of a two-term administration. Not so with the maverick regime of George W. Bush. He began his term with a "D+" roster and, depending on who he selects as attorney general to replace his pal, Fredo, he could end up with a gentleman's "C." Possibly a "C+."

Unfortunately, any improvement in the president's GPA is basically irrelevant to the country at this point. It's too late. President Bush should have studied his history more. It wouldn't have taken more than an hour.

The ultimate Bush crony, Dick Cheney, is an odd case. Cheney's appointment was probably his most widely praised personnel move. When he elevated Cheney from head of his vice presidential search team to his actual nominee, the bulk of the punditry was positive. A bold, gutsy move. Young George needs a gray hair, even a bald one. Don't worry about geography and electoral votes, go for competence.

It didn't work out quite that way.

Cheney was never actually a crony. He was brought on to be the campaign's grown-up and then the administration's grown-up. But the president trusted him like he would a crony. Presidents aren't supposed to trust vice presidents that much, for good reason. Cheney set up a separate power base and even, uniquely in history, a separate bureaucracy. But Mr. Bush thought he was a regular guy so he didn't see the pal's putsch. It didn't matter too much because Bush probably agreed with Cheney most of the time. It was just that Cheney thought of stuff first.

But the rest of the White House staff was Crony City. Karl Rove probably had more official power than any paid political consultant in history. His power was in policy, not just politics. His close aide Ken Mehlman also came over from the campaign.

Karen Hughes was a top-tier crony with no federal experience. She brought her whole communications operation straight over from the campaign. Clay Johnson, a friend from Andover and Yale, ran personnel.

In that original crowd, only Cheney and Card had any real Washington experience. Bush said that lack of experience was a virtue. It could have been true if he or his staff had what Napoleon Dynamite called "skills."

Rove, Gonzales, and Karen Hughes are gone, though Hughes is over at the State Department.

Most of the cabinet changes have been improvements too: Robert Gates for Donald Rumsfeld, Henry Paulson for Paul O'Neill via John Snow, Michael Hayden for George Tenet via Porter Goss, Tom Ridge for Michael Chertoff (post 9/11) and anyone for John Ashcroft via Alberto Gonzales.

All that might bring the grade up to a "C."

Bush's model seems to have been the Clinton administration. Bad call. Ronald Reagan and George W. Bush both brought in tough, seasoned non-cronies at the top of the White House roster. Not Bill Clinton.

Remember Mack McClarty, the Arkansas natural gas man who was Clinton's Chief of Staff until Leon Panetta was brought in to clean up the mess? How about Bernie Nussbaum, the White House counsel who got the president into so much hot water until Lloyd Cutler bailed him out? And poor Vince Foster?

Dee Dee Myers was the youngest press secretary ever until Mike McCurry came in for cleanup duty. Campaign wonder boys George Stephanopoulos and Rahm Emanuel had big White House jobs before they went off for greater fame and greater fortune. Webb Hubbell was detached to the Justice Department to keep and eye on Janet Reno. Hillary Clinton was in charge of health care policy.

Bill Clinton probably knew as much about the nuts and bolts of government domestic policy as any president. George W. Bush knew a lot less. Both started their administrations in Permanent Campaign mode. Both would have been better served by the teams they had at the end instead of the beginning. They might have been able to govern with popular support.