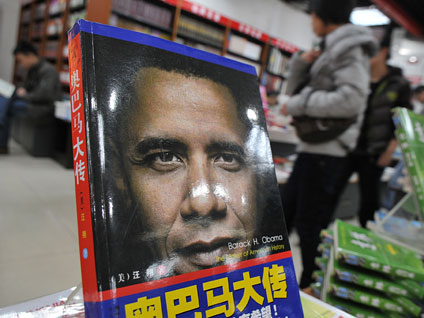 The 2010 midterm elections were not just big news for all Americans. The rest of the world took notice too. For some, it was yet another sad step down for President Barack Obama, who took office with near rock star-like popularity internationally. For others, it provided a moment to reflect internally on similar political changes driven by the economic downturn. Regardless, an informal survey of opinion articles and reader comments in the world's leading news publications indicates that the rest of the planet seems to agree with President Barack Obama's assessment of Republican gains in the 2010 midterm election. In other words, it was his fault.

An opinion piece in the German newspaper, Suddeutsche Zeitung, says Europeans might struggle to take the Republican and Tea Party election victories in context:

"Any autopsy of the Democrats' massive defeat on Tuesday shows that the right did not prevail simply due to their own strength. This was a collapse of the Obama coalition; the president has lost the support of America's middle class. In Western Europe Obama still enjoys almost messianic approval ratings of 80 percent. Nowhere else on earth regards Obama's program as more self-evident. Reforms such as health insurance for all, an active state and more environmental and climate protection are seen as catch-up Europeanization, a simple normalization. Millions of Americans, on the other hand, see this as an audacious if not revolutionary agenda to serve the interests of the state."

Balekane Gaahlobogwe writes in the comment section of a story about the midterm elections in the South African newspaper, The Mail and Guardian, that the Republican's gains were part of a larger international trend:

"What befell President Obama is a real tragedy - but he can take solace in the knowledge that he is not the odd one out. Europe is also seeing a tidal movement to the right - Germany, France, UK and the whole of the EU is pressured to move right. 2010 election season in the G8 countries is [sic] going right wing."

Seumas Milne writes in The Guardian, a British newspaper, says the Democrats' loses stem mostly from the economic downturn, and that there is still room for them to recover well before 2012:

There's not the slightest mystery about the sweeping Republican advance in Tuesday's US midterm elections. It's the direct outcome of an epoch-changing crisis and a failed economic model. Six million Americans have fallen below the poverty line in less than three years, official unemployment is close to one in 10, two and a half million people have had their homes repossessed, living standards are dropping and an anaemic [sic] economic recovery already risks going into reverse. The room for manoeuvre [sic] over domestic reform has just been sharply narrowed, though renewed political momentum could still be created for 2012. But he can deliver abroad. If the US president really were to end the occupation of Iraq and begin a genuine withdrawal from Afghanistan next year, that would be a change people everywhere could believe in.

In The China Daily, an English language daily newspaper, Cheng Guangjin and Tan Yingzi write that most of the concern around the election is about how Sino-American relations might be affected by the shift in power and future political events, noting that much anti-Chinese rhetoric was used during campaign:

"This means a bigger challenge for China in dealing with the US as it will have to talk not only with the Obama team but also with Congress. Key changes in the House, such as Nancy Pelosi giving up the speaker's gavel, are likely to add fuel to the fire on China-related issues. The yuan revaluation was in the spotlight before the midterm elections, which some analysts said was used by US politicians to garner votes by turning China into a scapegoat for the faltering US economy. The midterm elections would not bring an end to China bashing, which could continue in the run-up to the 2012 presidential election, when both parties are going to focus on the economy. Without an improvement, both parties might try to find a scapegoat and obviously China is going to be a popular choice."

Australian political commentator Peter Hartcher writes in The Sydney Morning Herald, that he was more surprised by the roots than the existence of anger in the midterm elections:

"The surprising thing is that Americans' anger is directed not at the creators of their pain, but at the people who tried to cushion it. Anger is a standard tool, used by both sides of politics. One striking feature of rage 2010 seems to be that it is increasingly fact-proof. The future? American political anger is not going to go away, even if the economy improves, because it works. In the US system of voluntary voting, typically fewer than 40 per cent of voters will cast a ballot in a midterm election. So the ability to motivate turnout is decisive. Naturally, this works better for the party out of power. The motivating power of anger makes it uniquely valuable, and guarantees its place as the first - and future - emotion of politics."

Aijaz Zaka Syed of The Arab News, a Middle Eastern English-language Daily, said the Arab world is disappointed by Obama already, ableit for different reasons than the Tea Party:

Long before Obama reached out to the Arabs and Muslims in his inaugural address and much quoted speeches in Ankara and Cairo, he had won himself a captive, global audience. The disappointment that has followed those initial bursts of hope and optimism, therefore, has been equally great. For all his Martin Luther King-JFK rhetoric about love, peace and fellowship of men, he has ended up owning and perpetuating the divisive, hateful legacy of his predecessor. He could have stepped back from the mess left behind by the neocons to make a fresh start. NO wonder only two years after his path-breaking election, he is already being compared to Jimmy Carter as a one-term wonder and written off as a disaster. So like him or not, compared against the Grand Ol' Party of self-serving cynics and Bible-thumping bigots, this president may still be the best bet for America -- and the world."

Benedict Brogan of The Daily Telegraph, also from the U.K., said the lesson of angry voters, a newly divided - and potentially gridlocked - Congress and sharp loses by a recently popular president may be one of a country in decline:

The Foreign Office is already calculating the ways in which Mr Obama's weakness could undermine progress on all manner of fronts, from the Middle East to trade talks. They worry not only that the US economy is in deep trouble, but that American government in all its forms is seizing up, even entering a period of long-term decline. With the White House weakened and Congress divided, the Federal Reserve is seen as the only body with the autonomy to act. So much for the hyperpower. With America distracted, even if only temporarily, the power of the Brics - Brazil, Russia, India, China and now South Africa - is increasingly being felt. A modern version of the Big Four, which could bolster the voice of the more developed world against that of the nearly developed, and make a strength out of America's weakness, might be the theme that (Prime Minister James Cameron) began this week to discern.