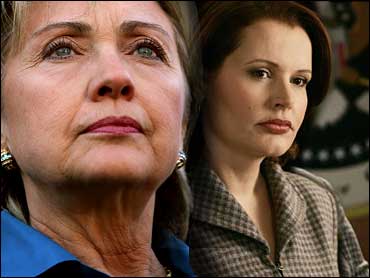 This column was written by Kathryn Jean Lopez.

I was in Los Angeles a week or so before the ABC drama "Commander in Chief" was to debut and you could feel the enthusiasm in the air...or, at least, you could see the billboards seemingly everywhere.

President Mackenzie Allen, played by Geena Davis, was a godsend to the White House Project, a group dedicated to insisting a woman must be president of the United States. It was even better than their Barbie for President doll. Ironically, though, the White House Project is probably most responsible for making people think twice about Ms. Presidents, fiction and non-fiction.

In his new book, "Can She Be Stopped?", which is about the prospects for, well, stopping Hillary Clinton from being elected the next president of the United States, John Podhoretz recalls a piece in Salon about a White House Project premiere bash for "Commander in Chief." At the (slumber? Nah — but shoulda been) party, Marie Wilson, the WHP president, "was just beside herself with joy for the slogan alone."

"'Isn't that the best thing that ever happened?' asked Wilson, adding that her organization has spent years pleading with Hollywood honchos to write shows about a female president, only to be turned down…. Tinseltown's contribution is so vital, Wilson argued, 'because we know that you can't be what you can't see.'"[Rebecca] Traister then described the reaction at the party to the scene in which Geena Davis is presented to the Congress. "The moment sent chills," Traister wrote. "The audience was sniffling. Some of them perhaps hadn't been sure they'd live long enough to see this. Even on television. As the show ended, Wilson took the stage, wiping a tear from her eye. 'I must have seen this eight times,' she said, 'and I keep trying to watch it without crying.'"

Equal Rights Amendment — oh please! This C in C nonsense is enough to make a gal want to welcome bad toilet-seat etiquette and start a "Repeal the 19th Amendment" campaign.

In TV land, Tuesday night would become Thursday night, after a rejiggering hiatus. Though the Golden Globes loved Geena Davis's president, TV viewers didn't. This Thursday, as primetime shows are nearing their season finales, "Commander in Chief" didn't even make it that far, pulled by ABC earlier this month. Considering all the pre-show buzz C in C got, in no small part due to Marie Wilson and sisters, you can't help but wonder if they weren't a buzz-kill. And with re-runs to come.

Given that Hillary Clinton's likely the woman who's seriously running for real-life president of the United States in 2008, I'm happy if we keep it just at Ms. Wilson Goes to Washington (and all around the country) with her we-girls-can-do-anything-AND-MUST-BE-PRESIDENT message. But if the White House Project is serious about its mission, they might want to get real.

As John puts it in his book:

The Clintons will need to quiet down the blather about the historic nature of her election and tone down the civil-rights-style "We Shall Overcome" nonsense that Marie Wilson and her ilk represent.

But just last week, at a dinner at the United Nations sponsored by whom else but the White House Project, Geena Davis announced, "So many countries have had a female head of state before us. So it is certainly time."

Quick, grab a woman off the Ellipse, any woman. (This silly, patronizing attitude is similar to the one folks had about who should replace Sandra Day O'Connor on the Supreme Court last year).

"I think it's appalling that we haven't yet," she continued, according to the Associated Press.

"The crime [— the CRIME?!] is not that it's taken so long, by why haven't we done it yet?" she said to loud applause from the predominantly female audience [thank heavens for small favors... Repeal 19 is sounding more tempting] that included Martha Stewart and former Maryland Lt. Governor Kathleen Kennedy Townsend.

The American people might be perfectly happy to elect a qualified woman to the White House (the latest Gallup poll on the question had 92 percent saying they would), but they're not going be guilted into electing the first lady president. A country well familiar with the concept of female bosses—including in their homes—can see through whiny glass-ceiling nonsense, even if such old-maid rhetoric is still bringing in money to groups like the White House Project that don't even live on Venus, never mind Earth.
By Kathryn Jean Lopez
Reprinted with permission from National Review Online