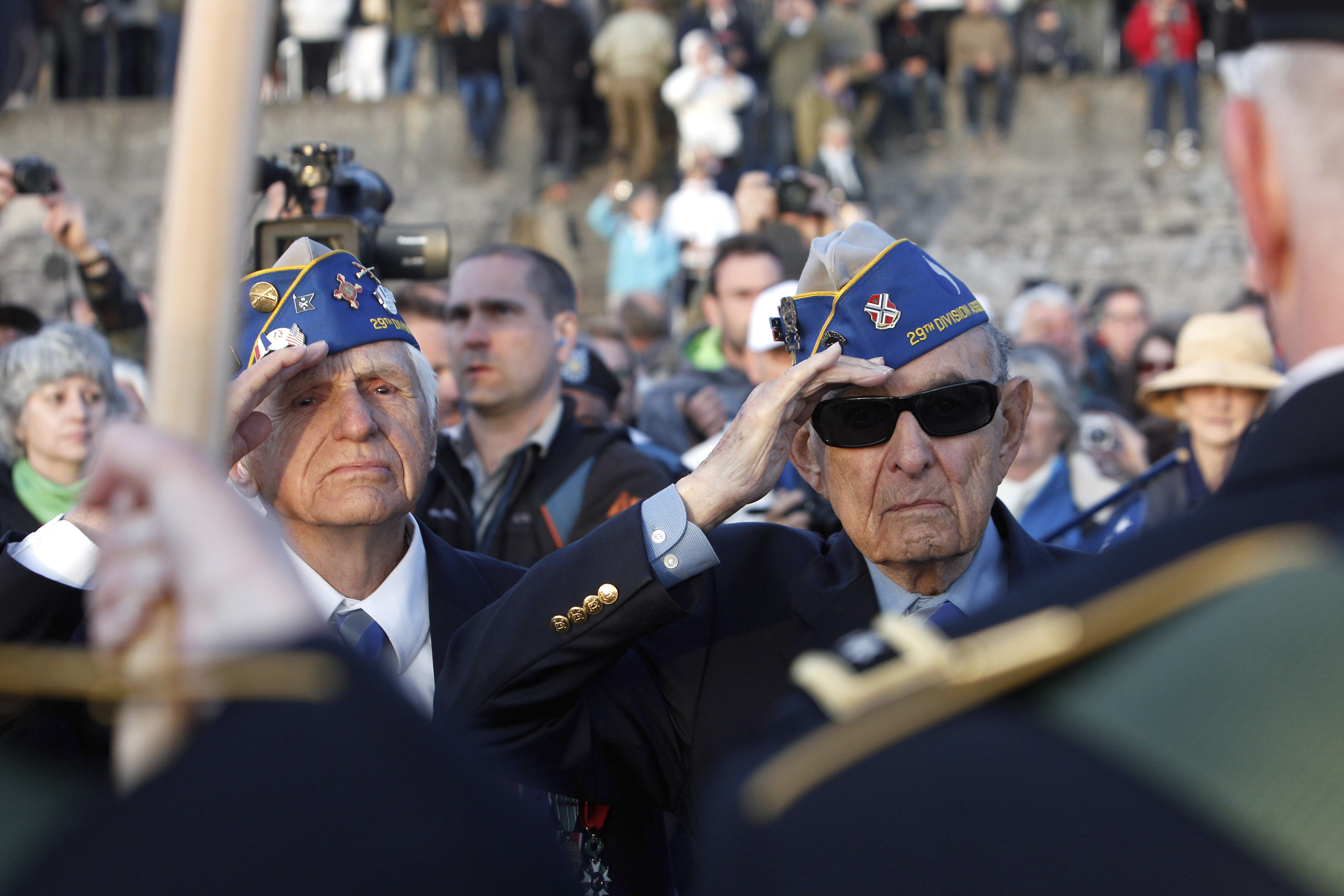 VIERVILLE-SUR-MER, France -- Veterans from the U.S. 29th Infantry Division returned to the shores of Omaha Beach at dawn Friday after 70 years - this time the storms replaced by a bright sun and their mission of war giving way to a desire to remember their fallen comrades.

As the sun came up over the Normandy coast, the seven returning vets and their family members toasted those who died when more than 150,000 U.S., British, Canadian and other Allied forces came ashore on June 6, 1944.

At 6:30 a.m., the precise hour that the first waves of infantry began wading ashore under a deafening hailstorm of German machine-gun and mortar fire, the men - most now in their 90s - raised glasses of bracing Calvados apple brandy to the memory of friends killed that day.

Hundreds of onlookers crowded the beach, including many re-enactors in period army uniforms. Some drove vintage jeeps and armored vehicles like those seen here 70 years ago.

A military band of serving 29th division members played taps and "Amazing Grace" before the seven vets walked off the beach to the applause of hundreds of onlookers.

The 29th, a National Guard formation nicknamed the Blue and Gray, was one of six Allied infantry and three airborne divisions that assaulted a 50-mile stretch of heavily defended coastline. Nearly 1,000 members of the division were killed, wounded or went missing on the invasion's first day. Thousands more died in the ensuing three-month Battle of Normandy in addition to some 20,000 French civilians killed in Allied bombardments.

Retired doctor and author Harold Baumgarten, 89, of Jacksonville Beach, Florida, has returned to Normandy many times over the decades.

"I landed on this beach in the first wave and I got wounded five times - three times on D-Day and twice on June 7th," Baumgarten said. "I had to stop. I ran out of blood."

In interviews this week in Normandy, Baumgarten and other 29th Division vets described in vivid detail their memories of that morning 70 years ago.

Baumgarten was a 19-year-old from the Bronx when he jumped off a landing craft into the surf and waded into France, passing the bodies of soldiers whose war had ended there.

"I can look out at that beach and tell you where each was lying and I can describe his face, even nowadays," Baumgarten said.

Another 29th Division veteran also paid tribute to "those guys on the bluff" - referring to the 9,387 men killed during the battles in the summer of 1944 who are buried at the nearby U.S. cemetery in Colleville-sur-Mer.

"They're the ones that are responsible for guys like me and the rest of the vets you see to get back home," said Steven Melnikoff, 94, of Cockeysville, Maryland.

"They paid the price. They are the heroes," he said. "We have a lot of people with a lot of ribbons but those guys probably didn't get a single ribbon. But those are the guys I come back for."

John Raaen Jr. is 92 years old now and has been back to the beaches a half dozen times.

He was a 22-year-old captain on what he calls his first visit on June 6, 1944, when he led a company of rangers onto Omaha Beach.

He told CBS News correspondent Mark Phillips that it is important that people like him tell stories and reflect on what happened.

"I think it is more important because we are the last reporters, true reporters, on it," Raaen said. "The rest are historians and historians do not get it right, I can guarantee you."

"Vive l'Amerique! Vive la France! And long live the memory of those who fell here for our liberty."