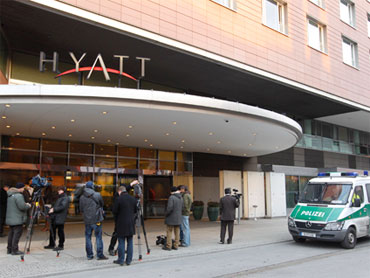 Four heavily armed robbers who stormed a poker tournament in a luxury hotel and escaped with a hefty cut of the jackpot are still on the run, German police said Monday.

CBS News Correspondent Richard Roth reports that the men were armed with machetes and guns and shouted "Armed Robbery!" before storming the downtown Berlin Grand Hyatt hotel on Saturday afternoon. The men forced hotel employees to hand them at least part of the tournament's jackpot money, which stood at $1.36 million.

Inside the poker room, panic spread among the participants and at least seven people were injured while trying to escape, police spokesman Guido Busch said. Some dove under card tables, while others raced for the exit, Roth reports.

One robber with a machete barely got past a security guard. Another robber was nabbed and brought to the floor, then let go when companions came to his aid and threatened the guard, reports Roth.

Following the brazen daylight heist, the robbers escaped on foot through a nearby shopping mall - not wearing black masks any longer - and finally fled in a getaway car.

Roth reports that once the robbers escaped, play resumed where it left off, with American Kevin MacPhee winning the tournament.

Speaking via satellite to "The Early Show," MacPhee said Monday morning that he, "heard some screaming and some yelling" and his "first instinct was just to get down on the ground."

MacPhee told "Early Show" co-anchor Maggie Rodriguez that he assumed "insurance was taking care of" the money stolen. "Yeah, I'll get all my money," he said.

The total amount of stolen money is a "low six-digit-figure," Busch said. Local media previously reported the robbers managed to escape with $272,000.

The five-day-tournament was organized by the European Poker Tour, which calls it the biggest such event in Germany.