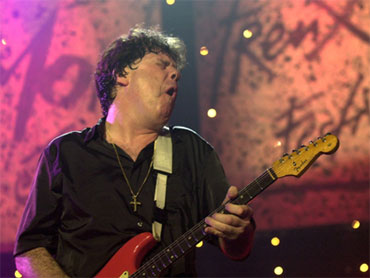 Manager Adam Parsons told the BBC that Moore was found dead Sunday at a hotel on Spain's Costa del Sol, where he was on holiday. The cause of death was not immediately known.

Thin Lizzy drummer Brian Downey said Moore's death was a "total shock," and guitarist Scott Gorham said he was "a great player and a great guy."

Born in Belfast, Northern Ireland in 1952, Moore was a member of Dublin band Skid Row before joining Thin Lizzy in 1973, playing on tracks for the "Nightlife" album. He left after four months, but rejoined four years later and played on the band's "Black Rose" album before going solo once again.

He had a successful solo career, and his accomplished, bluesy playing won plaudits from other musicians.

Thin Lizzy had global hits in the 1970s with songs like "The Boys are Back in Town" and "Whiskey in the Jar." Frontman Phil Lynott died in 1986, but with a different lineup the band continues to tour today.

Funeral details were not immediately available.