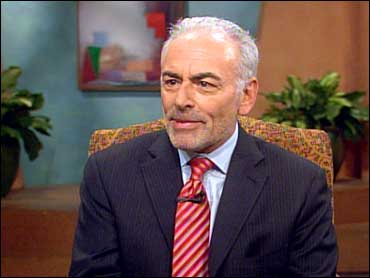 When it comes to retirement, many of the old rules have changed. Pensions are becoming a thing of the past and the future of Social Security is uncertain. So it's important to take charge and think about how much you need for your golden years.

Lee Eisenberg, the former editor-in-chief of "Esquire" magazine tackles the issue in his new book "The Number: A Completely Different Way to Think About the Rest of Your Life."

Eisenberg talked about the book with The Early Show co-anchor Rene Syler.

In the past, people could count on pensions and social security but Eisenberg says "those days are gone." Instead, he says we need to plan the rest of our lives, financially speaking, ourselves.

"The new rest of your life to put it into a visual image is you see a happy sunset way off there on the horizon and you've got to get into a boat and get there. Unlike the old rest of your life where there were systems in place as you mentioned to help us get there, we are now the captains of our own ship, and in many cases, our ships are leaky," Eisenberg says. "But the really big problem, the big challenge, which is solvable, is that nobody taught us how to sail. We never got lessons. So we've got to really learn how to put up that sail or get our paddles out and get us to that sunset ourselves."

One reality is that people are living longer and that our money needs to last a lot longer, too, than it used to.

"In the old rest of your life it was simple. You lived, you worked. Generally you retired at 65 and then three or four or five years later you died. It was pretty easy. In the new rest of your life, however, we live longer. There's a much longer period between the time we retire and the time that we finally deteriorate and die. And two things have to happen in that longer period. Yes, you need to be able to finance it, but you also, and this is very, very important. You also have to figure out ways to remain engaged. You have to figure out ways to be fulfilled. You have to be productive and feel useful," Eisenberg says. "It's a question of what can we do to really feel satisfied."

The book is not a how-to guide, but rather covers the overarching issues about money. Eisenberg also talks about uncertainty principles, things that we thought were going to be one way but turn out to be something completely different.

"First of all, we're uncertain because our pensions are going away. You pick up the newspaper every day and there's news of another giant company either freezing its pension plan or in the case of an Enron or WorldCom or all those other companies, the implosion and loss of a pension plan. Also, this past year there's been all of this talk about the future viability of Social Security. So we're very uncertain about those old support systems," Eisenberg says.

He says we cannot rely on those old support systems. "We may well have Social Security but we don't know to what degree it's going to get changed. In the new rest of your life there's also uncertainty because as we think about how we're going to manage things we need to wrestle with a series of risks. That a lot of people don't really take into account. There's the risk of living longer. That's a great thing but that's also a challenge."

Eisenberg says one of the greatest fears is outliving your money.

"You don't want to do that," he says. "There's the risk of inflation. Most of us don't remember the last period of really serious inflation. But if anything can take a nest egg and scramble it, inflation can do that because the value of your money will be worth so much less."

Rising health care costs, Eisenberg says, is a "biggie" and says that challenge isn't going away anytime soon. "I can't sit here or anybody can sit here and say there's going to be some kind of a sea change in that. So you really need to take part of that nest egg, put it aside and make sure that you are covered. I read some amazing statistic that something like one out of three people, 60 years old today, is likely to spend some time in a nursing home. And, you know, with 77 million baby boomers out there, many of whom are turning 60, a great number of people have got to have something in store for that if they need it."

One of Eisenberg's uncertain principles is money and the value of it.

"Money is really not much more than a tool. It's a very versatile tool. But what is money good for? We don't really think about that very much. It's good for buying golf clubs and good for buying stuff. But the fact of the matter is money can also be used for buying satisfaction," Eisenberg says. "And the fact is, if you think hard, if you really think about what money is good for you, what will make you engaged over that long sloping period. It may be things that don't cost a lot of money. This is the great news in all of this. If you are unrequited dream is to write the great American novel or learn to play the piano or go to interesting places and have interesting experiences, those are not necessarily high-ticket items. If you examine your life and think about what matters, it may be that you will require less money than you think you need if all you do is think about consumption."

To read an excerpt of "The Number: A Completely Different Way to Think About the Rest of Your Life," by Lee Eisenberg, click here.

"The Number: A Completely Different Way to Think About the Rest of Your Life" is published by Free Press, which is part of Simon & Schuster, which is owned by CBS, as is CBSNews.com