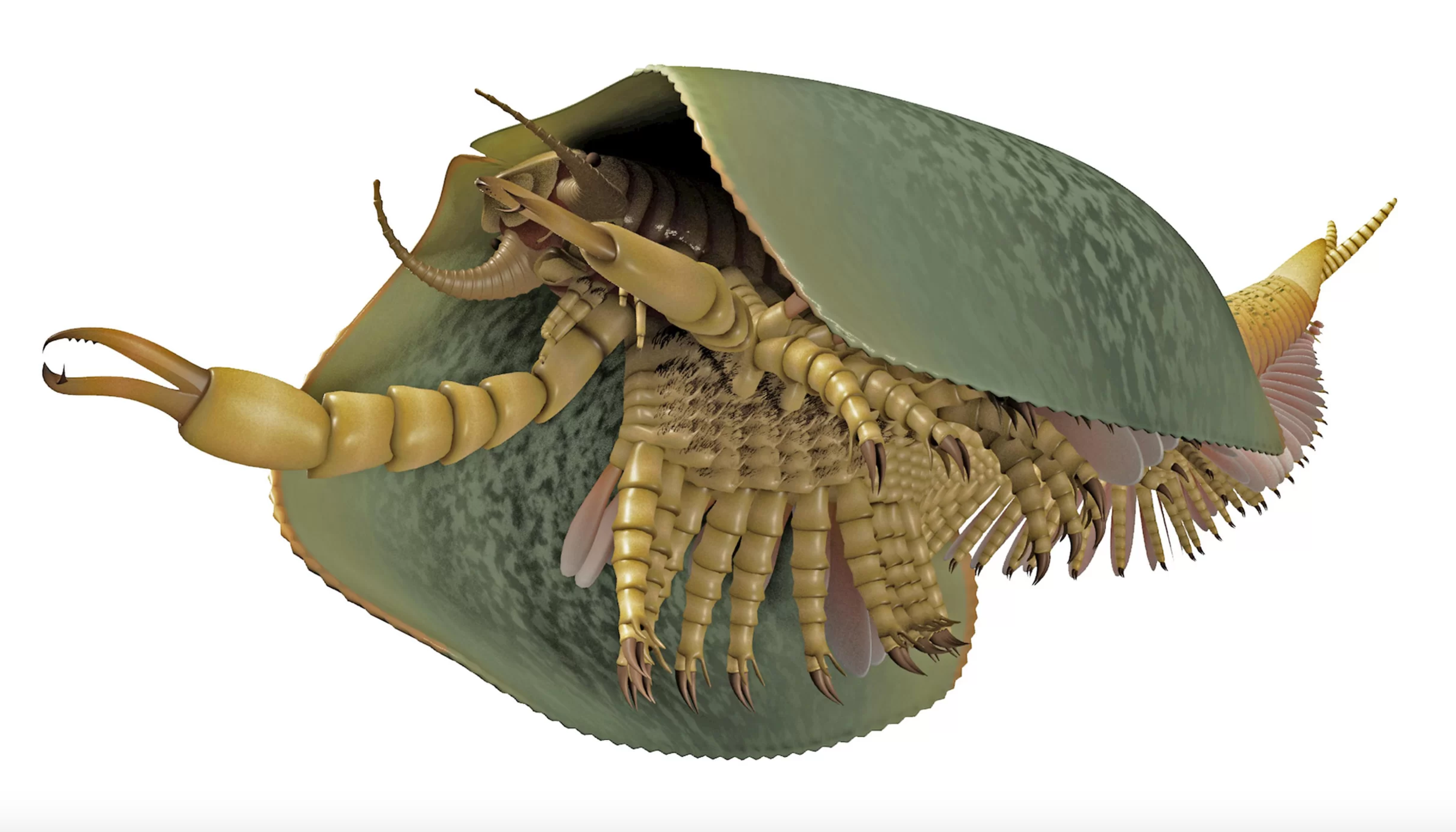 A 508-million-year-old critter — one that looks like a weird lobster with 50 legs, two claws and a tent-like shell — is the oldest known arthropod with mandibles on record, a new study finds.

Arthropods are a group of invertebrates that includes spiders, insects and crustaceans. Many arthropods, including flies, ants, crayfish and centipedes, have mandibles — appendages that can grasp, crush and cut food. But until now, it wasn't clear when this unique feature evolved.

Now, researchers can say that mandibles developed by at least the late Cambrian (the Cambrian period, known for its famous explosion of new, diverse life, lasted from about 543 million to 490 million years ago). [See Images of the First Known Arthropod to Sport Mandibles]

Researchers discovered the first of the 21 fossil specimens in sedimentary rock in Kootenay National Park, in British Columbia, Canada, in 2012. They named the roughly 4-inch-long creature Tokummia katalepsis, honoring Tokumm Creek, which runs along the northern part of the park through Marble Canyon, where they found the fossils. The species name, katalepsis, is derived from the Greek word for "seizing."

Like other Cambrian animals, T. katalepsis looks bizarre by today's standards. The predator had 50 paddle-like legs that likely helped it swim and walk in a tropical sea, and "a pair of very strong claws — some of the strongest claws we have seen in any Cambrian arthropod," said study co-author Jean-Bernard Caron, a senior curator of invertebrate paleontology at the Royal Ontario Museum in Canada. These claws likely helped the animal grasp and pierce soft-bodied prey, such as worms, he said.

The critter also had a bivalve (two-halved) shell and two tiny eyes at the base of its antennae. But T. katalepsis' most famous features are its serrated mandibles, Caron said.

The group mandibulata (animals with mandibles) is the most diverse and abundant group of arthropods on the planet. The group includes the myriapods (millipedes, centipedes and their relatives), the pancrustaceans (including shrimps, lobsters and barnacles) and insects, said study lead researcher Cédric Aria, who did the research while a doctoral student of ecology and evolutionary biology at the University of Toronto. Aria is now a postdoctoral researcher at the Nanjing Institute for Geology and Paleontology in Nanjing, China.

Initially, some researchers thought these bivalved species were among the earliest ancestral arthropods, Aria said. But the new analysis shows that instead of being at the base of the arthropod family tree, T. katalepsis evolved later on, after the chelicerata (spiders and mites) split off into their own branch.

"Quite simply, Tokummia (and its relatives) fits at the base of all mandibulates," Aria told Live Science in an email.

In addition, an analysis of T. katalepsis' anatomy revealed what other characteristics made mandibulates so successful. For instance, its more than 50 body segments were an important adaptation for mandibulates, "as it allowed for the development of additional segments and structures at and around the base of the limb, called 'coxae,' and from which the mandibles themselves likely [arose]," Aria said.

The new finding is only the latest fossil discovery from Marble Canyon. Other Cambrian fossil discoveries there include an ancient fish known as Metaspriggina and a four-eyed arthropod called Leanchoilid.

The finding is a potential novel perspective on the evolution of arthropods, said Jakob Vinther, a paleobiologist at the University of Bristol in England, who was not involved with the study. However, he cautioned that because the fossils are flattened, they might be difficult to decipher. [Cambrian Creatures Gallery: Photos of Primitive Sea Life]

"Finding mandibles is a key finding for understanding the evolution of myriapods, crustaceans and insects," Vinther said. "I hope that the observations can be validated by other researchers also in the near future."

However, another paleobiologist, Peter Van Roy at Ghent University in Belgium, who was also not involved with the study, called the study and interpretation of the material "well-supported from what I can see."

Van Roy added that "these fossils elucidate the early evolution of this very important clade [group], which so far was poorly understood, and underscore the importance of exceptionally preserved fossils for resolving phylogenetic [family tree] questions in deep time."

The study was published online April 26 in the journal Nature.