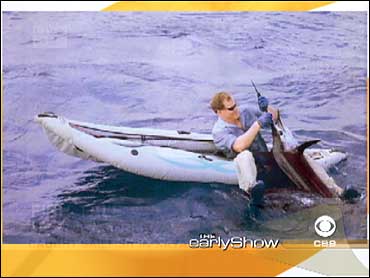 Everyone knows that fisherman love to tall tales.

But Jeff Morrow has the proof to back his up, because it was

Earlier this month, in a tournament off the coast of Guatemala, Morrow, a lawyer from Jacksonville, Fla., hooked a feisty sailfish from a tiny, inflatable kayak.

Morrow told The Early Show co-anchor Julie Chen Wednesday he was in the thick of the contest when he and a friend suddenly decided to alternate on a kayak and go fly-fishing for sailfish.

In all, Morrow and the friend reeled in four fish and one dolphin from the kayak, and many other fish from regular boats.

But his sailfish adventure is the one he'll remember.

The friend, on a nearby boat, captured the scene on camera.

Watching the video along with Chen, Morrow explained that he caught the sailfish with a fly-rod.

All the fish caught in the tournament were released unharmed, and Morrow says at one point on the video, where it appears he and the fish are struggling, he's actually attempting to position it to remove the hook so he could free the fish.

"It was a very exciting form of fishing. I was frightened and so was the fish. My eyes would look right on the fish's eyes, he was so close to me. And I could feel his fright and he could probably feel my fright."

At times, Morrow added, "It was like a bull coming at me. He charged the boat a couple of times with the bill."

At one point, the fish jumped out of the water and almost hit the kayak as he came back down.

"It took me about three-and-a-half miles, about over an hour, drug me around in the Pacific. … We were in about 2,000 feet of water."

Morrow came through it unscathed.

He says it was "primeval, almost. It's other-worldly. The way that works is that he just drags your boat around, so you're not pulling back so hard. You're basically on a sleigh ride, and it's very exciting."

Morrow is a founding member and the current president of the Southern Sailfish Association, a non profit organization that bills itself as being made up of "sportsmen who care." The group says its mission is "to promote the catch and release of billfish globally, and to promote medical, legal, and financial assistance to indigent residents of Central America, South America, and Africa.