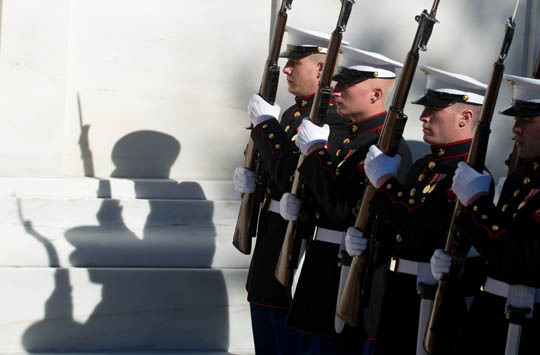 WASHINGTON -- With a steady breeze filling out every American flag across the National Mall, this is a picture-perfect Veterans Day here in Washington. Veterans are everywhere. Passers-by are thanking them for their service.

At the Vietnam Memorial this morning, a soldier who served in Iraq was giving a talk to a small group about his difficulties adjusting to life back in the States. Police kept pulling him over for speeding, he said. He had spent a year driving with the pedal to the metal, speeding to avoid roadside bombs. "If the trees weren't going by in a blur, I wasn't going fast enough," he said. Now he's home; it's time to slow down.

But there are many soldiers and Marines who won't make it to the ceremonies today. They're just back from the war too; they came in on medical flights, and they're filling the wards at the National Naval Medical Center in Bethesda and Walter Reed Army Medical Center.

Nearly 50 critically injured Marines are now being treated at Bethesda Naval, many with "very complex catastrophic injuries," says Karen Guenther, the president of the Semper Fi Injured Marine Fund. "I think this is the busiest we've ever been."

Guenther knows busy. In 2003 she was a nurse at Camp Pendleton treating Marines wounded in Fallujah and other "triangles of death" in Iraq. She watched families trying to care for their Marines also struggling to make ends meet -- some parents quit jobs, spouses took leaves of absence. Paychecks were gone, and the bills were piling up.

When a Marine is injured the family is injured, Guenther realized. The military assistance wasn't enough. So Guenther founded the Injured Marine Semper Fi Fund. Since then, the group has given out $44 million.

It's a lot of money, Guenther admits, but with a new wave of casualties coming in from Afghanistan, she's back to "begging for support."

"We're still helping those injured in 2003, plus those coming in from Afghanistan," she says. The wounds are devastating. "For the first time we're having quadruple and triple amputees. They are going to need communities arms wrapped around them for the rest of their lives."

So when you salute a veteran today, think about the soldiers, Marines, sailors and airmen who didn't make it to the parade. Some of them can't make it outside to enjoy this glorious day.