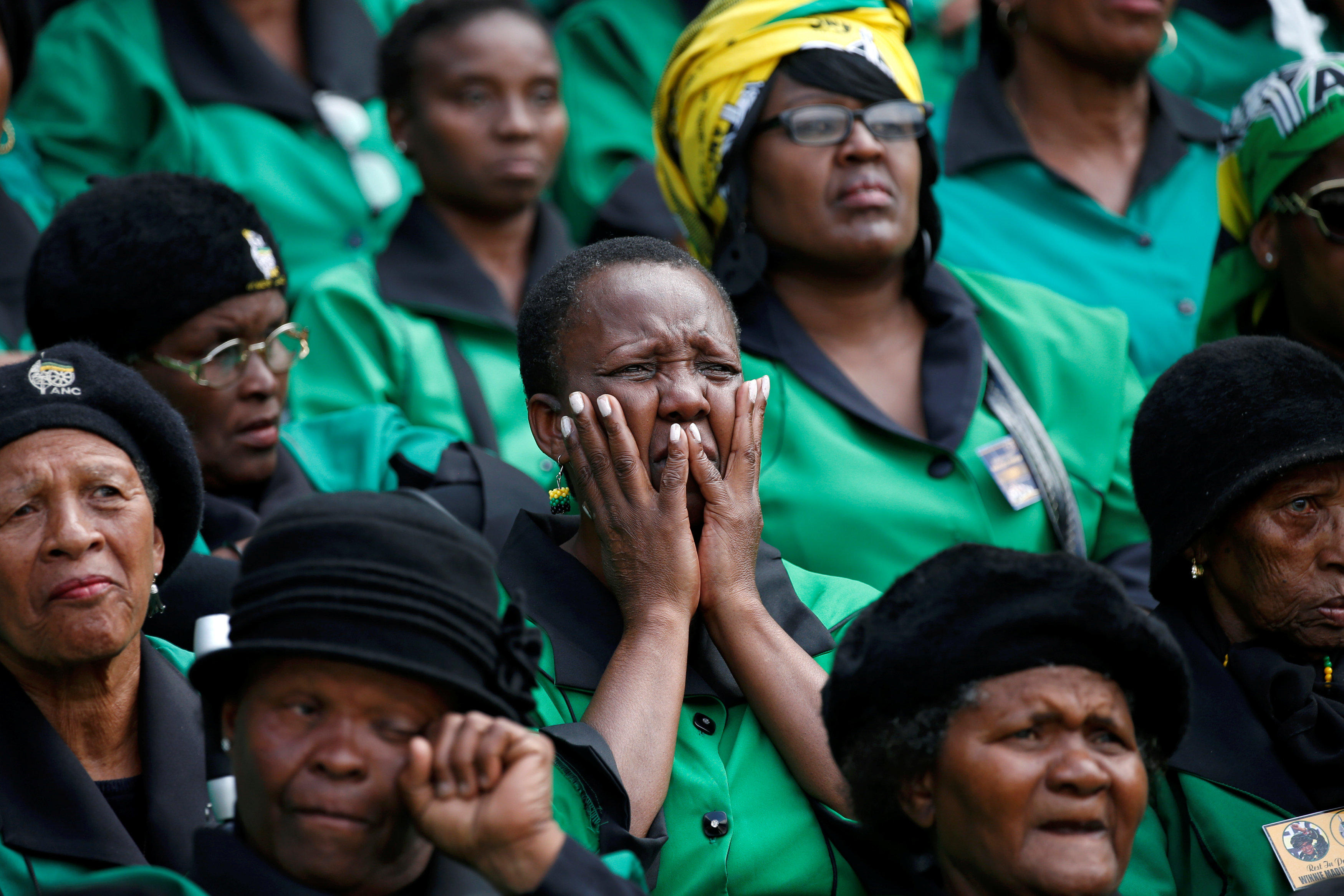 JOHANNESBURG -- Several thousand mourners gathered at Soweto's Orlando Stadium on Wednesday for the official memorial service for anti-apartheid activist Winnie Madikizela-Mandela, who died on April 2 at the age of 81.

The death of Madikizela-Mandela, often called the "Mother of the Nation," has triggered widespread soul-searching in South Africa over the legacy of one of the nation's most important fighters against racial discrimination, yet who was dogged by scandal.

During the decades of imprisonment of her husband, Nelson Mandela, Madikizela-Mandela helped keep the plight of the political leader and the gross injustices of the apartheid system in the global spotlight, her own face and voice becoming synonymous with the anti-apartheid struggle.

In the week since her death in a Johannesburg hospital, there has been an outpouring of support for a woman whose fearlessness and defiance helped bring end to the apartheid system, but whose public image was also tarnished by controversy.

In a social media campaign "Winnie has not died she has multiplied," scores of young women have posted pictures of themselves wearing doeks, the traditional head wrap that Madikizela-Mandela frequently wore.

The ruling African National Congress, with which Madikizela-Mandela had a rocky relationship over the years, has held memorial events across the country, including Wednesday's ceremony and an official funeral scheduled on Saturday.

"She was a symbol of hope to many of us," President Cyril Ramaphosa said at a memorial in her hometown on Tuesday.

The young Madikizela-Mandela grew up in what is now Eastern Cape province and came to Johannesburg as the city's first black female social worker. Not long after, she met ANC activist Nelson Mandela and the couple married in 1958, forming one of the most storied unions of the 21st century.

After Mandela was imprisoned on Robben Island, Madikizela-Mandela embraced her own leadership in the freedom struggle with steely determination and at great personal sacrifice.

For years, she was routinely harassed by apartheid-state security forces, imprisoned and tortured. She was often away from her two daughters with Mandela, and in 1977, she was banished to a remote town in the middle of the country to separate her from the heart of the movement she led in Soweto.

"You decide to choose between the nation and your young children and it was a very difficult choice to make," Madikizela Mandela said in 2013. "Even to this day, a parent like me still feels that guilt."

Those years of harassment and stress were not without their toll. When Madikizela-Mandela returned from exile to Johannesburg, she became involved with a group of young men known as the Mandela United Football Club, who were widely blamed for violence in Soweto, where she was living. They were accused of the disappearances and killings of at least 18 boys and young men and the group's leader was convicted of killing a 14-year-old boy, nicknamed "Stompie," who was accused of being a police informer.

In 1991, a court found Madikizela-Mandela guilty of the boy's kidnapping and assault and sentenced her to six years in jail. She appealed and was found guilty of being an accessory in the assault, and the sentence was reduced to a fine and a suspended prison term. Madikizela-Mandela steadfastly denied any knowledge of any killings.

Mandela divorced her in 1996, claiming infidelity and saying that after his release from prison, his wife made him "the loneliest man."

Though she fought fiercely for democracy, the political career that Madikizela-Mandela embarked on after the first free elections in 1994 floundered. Mandela sacked his wife as one of his deputy ministers in his first cabinet, and her stints as a lawmaker, a post she held until her death, were lackluster.