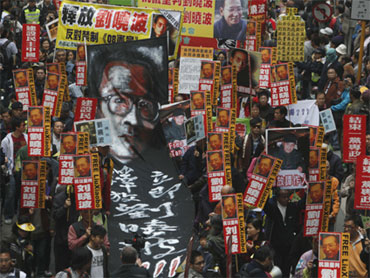 Chanting "One man, one vote to choose our leader" and clutching signs reading "Democracy now," the demonstrators set off from a crowded street in the heart of the Central financial district.

Dozens of the protesters tried but failed to breach a police cordon at the Chinese government compound. They staged a peaceful sit-in instead, joined by hundreds of others.

The relatively low turnout for the New Year's Day protest - police said some 4,600 people took part - showed that Hong Kong's political opposition faces an uphill battle as it tries to re-ignite the local democracy movement, which has been overshadowed by economic issues. Five pro-democracy legislators plan to resign later this month, hoping to turn the special elections they will trigger into a referendum on democracy.

At their peak, pro-democracy protests in Hong Kong drew hundreds of thousands of people. In July 2003, half a million marched to protest a national security bill that many considered draconian, forcing the Hong Kong government to shelve the measure.

The former British colony returned to Chinese rule in 1997 under a separate political system that promises Western-style civil liberties. Democracy is promised in Hong Kong's constitution, but the Chinese government ruled in 2007 that the territory can't directly elect its leader until 2017 and its legislature until 2020.

Hong Kong's current leader was chosen by an exclusive committee stacked with Beijing's allies, and only half of the territory's 60 legislators are elected, with the rest picked by special interest groups.

The protesters Friday said Beijing's timetable for democracy is too slow. Hong Kong activists have argued for years that the wealthy city of 7 million people is mature enough to choose its own leaders.

"Hong Kong should get democracy sooner. The sophistication, the worldliness of Hong Kong people has already reached the level where universal suffrage can be allowed," participant Joseph Fung said.

The Hong Kong government had no immediate comment on the protest. A woman who answered the phone at the Chinese government liaison office said no one was available for comment.
By Associated Press Writer Min Lee