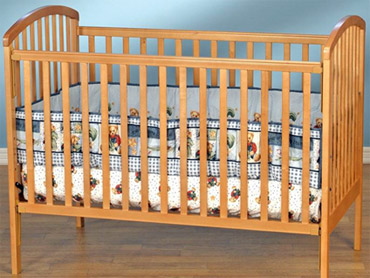 The government recalled thousands of Simplicity and Graco cribs Thursday, warning that babies could suffocate or strangle in them.

The Consumer Product Safety Commission said the Simplicity recall was linked to at least one death and involved thousands of cribs, possibly hundreds of thousands, though many had previously been recalled for other defects. The agency said about 217,000 Graco dropside cribs made by LaJobi were also being recalled.

The problem with both types of cribs stems from hardware failures.

In the case of the Graco-branded wood cribs, the side that moves up and down - the dropside - can break or detach, creating a dangerous gap between the crib mattress and dropped side. A baby can become trapped and suffocate or strangle. CPSC and LaJobi have received 99 complaints of dropside problems with the cribs. None involved serious injuries.

The Simplicity recall is for all full-sized cribs with tubular metal mattress-support frames. Those frames can bend or detach, causing the mattress to collapse and creating a space that a baby can roll into, become trapped in and suffocate.

A one-year-old boy in North Attleboro, Mass., became trapped in his Simplicity crib and suffocated in 2008, according to the commission.

"CPSC urges all parents and caregivers to not attempt to resell any Simplicity crib to a thrift store, at a yard sale or online," said agency spokesman Scott Wolfson. "These recalled cribs have killed far too many babies and need to be kept out of homes and daycare centers."

Simplicity has been the subject of almost a dozen recalls since 2005 and its cribs have been linked to 13 deaths.

The commission had previously recalled all Simplicity dropside cribs. With the latest recall, nearly all Simplicity cribs have now been recalled, possibly hundreds of thousands of cribs. Simplicity and its successor company, SFCA Inc., are no longer in business, so the agency doesn't know exactly how many cribs were sold.