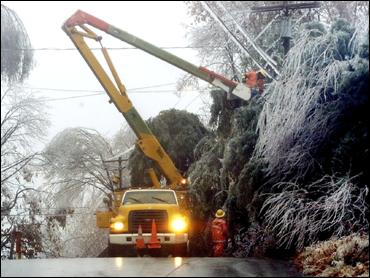 Tens of thousands of New Englanders were still without power late Monday, including more than 57,000 customers of Connecticut Light & Power, in the aftermath of a killer ice storm that swept throug the area.

Ice-covered pavement and downed trees made hazardous. In Maine, a teenager was killed and 10 other people were injured in a two-vehicle crash on a slick road. The storm has also been blamed for a second highway death in the state.

Some customers may have to wait until Wednesday before power is restored, said Frank Poirot, a spokesman for Connecticut Light & Power. Dozens of Connecticut schools were closed Monday.

The storm formed along the coast of the Carolinas and rolled northward Sunday along a cold front, producing rain from the Carolinas into southern New England. It then hit colder air that turned the rain to snow and ice farther north. An earlier storm had soaked large parts of the East on Saturday.

"Every 15 seconds there were thunder shots and the trees were snapping in half," Mark Fleming of Burlington told WVIT-TV. "It was like gunshots going off in the back yard. It was quite amazing."

"It's kind of like a winter wonderland where you look at the North Pole or something where you see all the trees are bent over, the icicles," Dwayne Aldridge of New Hartford, Conn., told WTNH-TV. "It is kind of pretty, but the devastation with the trees is just terrible."

Residents of southern Maine awoke Sunday to the season's first major snowfall, which later turned into freezing rain. Dozens of cars slid off highways and speed limits were reduced to 45 mph on the Maine Turnpike and Interstate 95.

Most parts of Maine had only 3 to 5 inches of snow by the afternoon, but trees sagged under the weight of ice. Some higher elevations got 10 inches of snow.

An estimated 15,000 Central Maine Power customers were without electricity Sunday afternoon, but that number was down to 4,000 by Monday morning.

"The problem we're having down there is that the outages are widely scattered," said Gail Rice of Central Maine Power. "There are a lot of small problems scattered about so it tends to be very labor-intensive and slow-going."

Some 15,000 homes and business were blacked out in New York state.

In Massachusetts, about 18,000 customers lost power, mostly in the central part of the state, but all but a fraction had service restored by Monday morning.

The VIP Auto Center in Portland had 31 mechanics changing tires for customers who waited to the last minute to get ready for the winter, general manager Bob Morneau said.

"The first snow is good for business," Aubuchon Hardware Store manager Ryan Lamb said. "I call it white gold coming from the sky."

The cold front along the East Coast extended all the way into Florida, where temperatures dipped into the freezing range early Monday in some northern counties. Frost was reported in the areas of Jacksonville and Tallahassee, said Al Sandrik, a National Weather Service meteorologist in Jacksonville. That isn't uncommon for this time of year in those areas, he said.