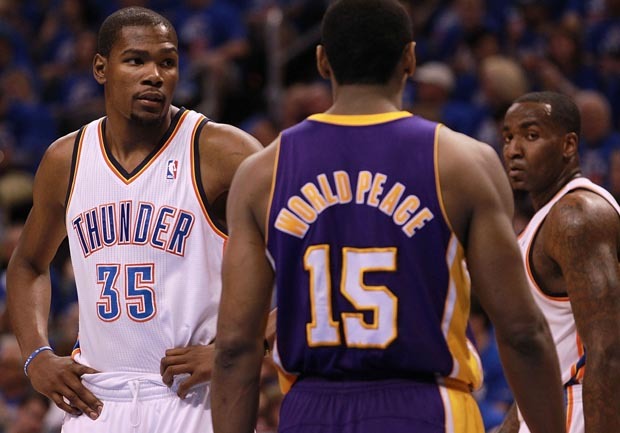 They will have enough time to rest as they get ready for a second straight trip to the Western Conference finals.

Westbrook scored 28 points, Durant added 25 points and 10 rebounds, and the two All-Stars skipped their usual rest periods to power the Thunder ahead in the second half for a 106-90 win over the Los Angeles Lakers in Game 5 of the West semifinals on Monday night.

"We know that's the most important time of the game, especially in a tight game," Durant said. "I think that we kept our composure throughout the fourth, and our poise and we made plays."

Kobe Bryant scored 42 points for the Lakers and took the briefest of rest — less than 2 minutes — in the second half. It didn't even take that long for the game, and their season, to slip away.

After getting eliminated by Los Angeles in 2010 and Dallas in 2011 before both of those teams went on to win it all, the Thunder knocked both out on their way to the West finals for the second straight year.

The only other time the franchise made consecutive conference finals was from 1978-80, including Seattle's only NBA title in 1979.

Once there, they'll face the top-seeded Spurs, the only team other than the Lakers or Mavs to win the West in the past 13 years and currently riding an 18-game winning streak. The series starts Sunday night in San Antonio.

CBSSports.com's Royce Young says the Thunder will have to continue playing with poise to beat the more experienced Spurs.

"It's a master versus pupil matchup. The Spurs are the original Thunder, a small market team built from the ground up that sustained success. They play as a team, falling lock step in line behind their leader, Tim Duncan," Young writes.

After Westbrook's pair of three-point plays fueled a 14-3 burst that put Oklahoma City ahead to stay late in the third quarter, Durant hit two 3-pointers as the Thunder scored the first 10 points of the fourth to push their lead to 93-77.

Bryant was waiting to check in when Durant connected on his second 3-pointer, just 89 seconds into the fourth quarter. But by the time he got in, there was little he could do — despite the 13th 40-point game of his playoff career.

"That what we do. That's our rotations and that's the right rotation to make," Bryant said. "You have to trust that unit coming in there to hold the fort down."

Lakers coach Mike Brown said he trusted that unit — including starters Pau Gasol and Andrew Bynum — after it had turned a five-point deficit into a lead to start the second quarter.

"I've got to be able to rest Kobe a few minutes here and there, and we didn't do a good job of handling it at that point in the game," Brown said, adding that he didn't keep Bryant out as long as he had planned.

Westbrook went running to the scorer's table and pumped his fist in the air after his first energizing three-point play, when he was able to flip the ball in after Ramon Sessions fouled him on the fast break.

"I just tried to throw it to the rim and luckily it went in. That kind of sparked us, and everybody else kept it going from there," Westbrook said.

Westbrook converted another after banking in a jumper from the left side despite Sessions slapping him on the arm to make it 82-76 with 1:29 left in the third quarter.

Durant extended the lead with a 3-pointer in the opening minute of the fourth and then hit another 32 seconds later — just after Bryant had stepped to the scorer's table to check in after a brief rest.

Bryant described it as "tough, to say the least."

Bass erupts for Celtics in 101-85 win over Sixers

BOSTON - Brandon Bass scored 18 of his postseason career-high 27 points in the third quarter on Monday night as the Boston Celtics pulled away from the Philadelphia 76ers to win 101-85 and take a 3-2 lead in their Eastern Conference semifinal series.

Kevin Garnett added 20 points and Rajon Rondo had 13 points and 14 assists for the Celtics, who can advance to the East finals with a victory in Philadelphia in Game 6 on Wednesday. The Sixers would need a win there to force the series back to Boston for a decisive seventh game on Saturday.

Elton Brand scored 19 and Evan Turner had 11 points and 10 rebounds for Philadelphia, which led by six points early in the third quarter before Boston scored 14 of the next 16 points. Bass scored eight of them, including back-to-back dunks followed by a steal that set up Ray Allen's fast-break layup to give the Celtics a 63-57 lead with five minutes left in the quarter.

Boston closed out the third with a 10-2 run over the final 3 minutes and outscored the Sixers 28-16 in the period. The Celtics also scored 16 of the first 22 points in the fourth quarter — seven from Rondo — to put away the game.

Paul Pierce had 16 points — a perfect 9 for 9 from the free throw line — and Allen, back in the starting lineup because of an injury to Avery Bradley, had five points.

The Celtics acquired Bass in December in a trade with Orlando for Glen "Big Baby" Davis, and he worked his way into the starting lineup after the All-Star break. Although he solidified the power forward position after Garnett moved to center, he hadn't done anything spectacular — until Monday.

Bass hadn't scored more than 22 points in a game this season and he matched his regular-season career high of 27 on Monday night. His playoff high was 19 points, in 2008.

He left the game to a standing ovation with 2 minutes left and the Celtics leading by 18.

Boston tied it 57-all when Bass stole the ball from Thaddeus Young and got to the free throw line, making both foul shots. After a Sixers miss, Rondo found Bass underneath for the dunk. Bass added another crowd-pleasing dunk before knocking loose a ball to start Rondo on a fast break he finished by finding Allen for the layup.

Notes: Actor Will Smith, a 76ers co-owner, was at the game, as were comedians Chris Rock and David Spade. ... Bradley did not play because of problems in both shoulders, coach Doc Rivers said. ... Rondo had seven assists in the third quarter. He picked up one of his most spectacular when he slipped at the free throw line but left-handed the ball to Greg Stiemsma for the dunk.