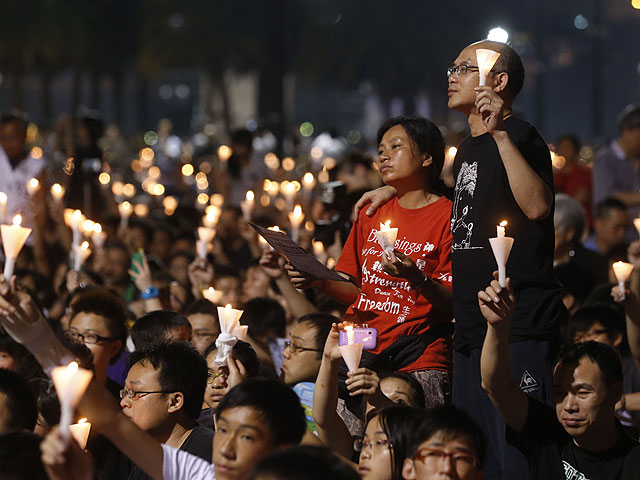 (AP) SHANGHAI - China's share benchmark has fallen afoul of the country's Internet censors by appearing to mark the 23rd anniversary of the Tiananmen Square crackdown on pro-democracy protesters.

In an unlikely coincidence certainly unwelcome to China's communist rulers, the stock benchmark fell 64.89 points Monday, matching the numbers of the June 4, 1989, crackdown in the heart of Beijing.

In another odd twist, the index opened Monday at 2,346.98. That is being interpreted as 23rd anniversary of the June 4, 1989 crackdown when read from right to left.

Public discussion of the Tiananmen crackdown, which the Communist Party branded a "counterrevolutionary riot," remains taboo. Analysts refused to comment on the numbers.

Officials at the Shanghai Stock Exchange were not available for comment.

Such searches draw the response, "According to law such words cannot be shown."

That prompted some users to comment on the "magical" nature of the market, while others groused about not being able to discuss the stock market online.

In Beijing, the anniversary passed without any major sign of protest. The front page of the party newspaper People's Daily trumpeted the "Stable, fast development of the Chinese economy: Advancing to be the World's No. 2."

The melee as soldiers fought their way into Beijing to clear Tiananmen Square is believed to have left hundreds dead. In response to the violence in the capital, demonstrations erupted in more than 180 cities and in some cases were quelled violently.

The government has never provided a credible accounting of the number of victims or arrests in the sweeping crackdown that followed.

Asked at a regular briefing if the government had changed its stance regarding the "June 4 issue" Foreign Ministry spokesman Liu Weimin said, "I just knew you would ask this question."

"The political case you mentioned was concluded long ago by the ruling party and government," he said, objecting to a U.S. State Department call for a reconsideration of the party's stance as "rude interference in China's internal affairs."