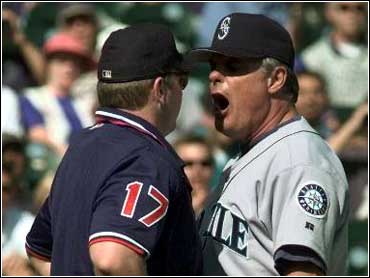 Nothing seems to be bugging the Detroit Tigers these days.

Juan Encarnacion and Dean Palmer homered and Deivi Cruz drove in three runs as the Tigers, who started out 9-23, reached the .500 mark by beating the Seattle Mariners 10-3 Thursday.

There was no recurrence of the insect swarms that plagued Comerica Park the night before. Though a few of the flying ants were visible, there were no interruptions and the 36,885 fans could concentrate on watching the Tigers win for the 11th time in their last 14 games.

"No bugs," manager Phil Garner said. "It was a beautiful day."

Damion Easley hit a two-run double for the Tigers (63-63), who won two of three from Seattle to finish a 5-2 homestand. Detroit got to .500 after misfiring on two earlier chances this week.

"It's been a major objective," Garner said. "We had to get here before we go anywhere else. Now the fun starts."

Bobby Higginson, who was 3-for-5, said the Tigers can't rest on just breaking even.

"We could lose tomorrow and be back under," Higginson said. "I'd rather talk about it if we were five games over."

Detroit started the day 5 1/2 games behind Cleveland in the AL wild-card chase.

"We can't be relieved. It's like we're starting over now," Easley said. "We have to keep playing ball the way we've been playing. If we do we'll be in striking distance."

"We've been playing some pretty good baseball against some pretty good teams, and I don't see us stepping backwards," Higginson said. "We dug ourselves a hole and got out of it. We've got a month left to see if we can keep playing well and then see where we're at."

Seattle has lost 10 of its last 11, including five of six against Detroit.

"It happens sometimes during the year," said Seattle's Edgar Martinez, who homered. "Our whole year's been really good. Now we're hitting that time where we can't get a break. It's part of the game. A lot of teams go through it."

The Mariners, who finished a 1-5 road trip, entered Thursday 3 1/2 games ahead of Oakland in the AL West.

"I really want to try to stay positive. It's pretty easy to do that when you're in first place," infielder David Bell said. "We're not playing the way we're capable of. That's obvious. But as far as I'm concerned, I think the only way to approach it is to go from here and put everything else in the past. There's absolutely nothing we can do about it."

Mariners manager Lou Piniella was ejected in the bottom of the eighth by plate umpire Brian Runge for arguing balls and strikes.

"I got on the umpires on a couple of pitches. I said, `Where were they?' I used a word I don't want to mention and that was that. Then I got my say in," Piniella said.

Brian Moehler (11-7) overcame Martinez's two-run homer in the first inning and extended his career-best winning streak to five games, also a season-high for the Tigers. He gave up two runs on six hits in 5 1-3 innings.

Jamie Moyer (11-8) lost his fifth straight start, giving up four runs on eight hits in six innings. He has an 11.07 ERA during his losing streak.

The Mariners took a quick 2-0 lead when Al Martin led off the game with a single and, two outs later, Martinez homered to right-center. It was Martinez's 31st home run of the season and second in two days.

But Encarnacion's one-out solo homer was the first of three straight hits that started a three-run home half. Palmer hit a sacrifice fly after singles from Bobby Higginson and Juan Gonzalez, and Cruz had an RBI single.

"We came right back and took the lead," Garner said. "It says to us, `They're just not going to beat us.'"

Cruz made it 4-2 with another run-scoring single in the fifth.

Palmer ht his team-leading 25th homer off Brett Tomko for a 5-2 lead in the seventh.

John Olerud hit a sacrifice fly in the Seattle eighth, but the Tigers put the game away with a five-run home half featuring Easley's two-run double and RBI singles by Gonzalez and Cruz.