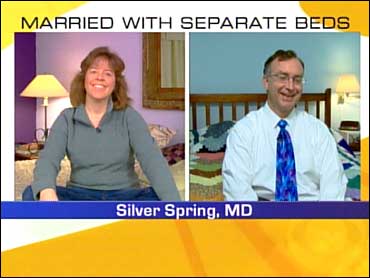 Do you and your partner sleep apart in another bed or another room?

You're not alone. A 2005 National Sleep Foundation survey indicates that 23 percent of adults frequently sleep solo because of their partner's sleep habits like snoring.

Kirsten and Bill Hawkins of Silver Spring, Md., say they are happily married but sleep in different rooms. They joined Rene Syler on The Early Show to talk about it.

Kirsten said she sleeps in her own bedroom at least five nights a week.

"We try to get back together on weekends if we can," she said, "but it doesn't always work that way. Sometimes, we'd rather sleep."

Kirsten and Bill have two children. Kirsten explained that with the birth of her first baby, she became a light sleeper as she got into the habit of tending her newborn throughout the night.

Bill, on the other hand, is a heavy sleeper.

"My head hits the pillow and I don't wake up until the alarm clock goes off," he told Syler.

Bill said he didn't necessarily feel rejected when his wife proposed that they maintain separate bedrooms.

"I mean, we talked about what was going on and the real deal is, it's hard to have a good relationship if somebody is a zombie, if they are just walking around totally exhausted," he said. "And we talked about it and said, 'Hey, let's just try some things.' And this is one of the solutions we tried and it seems to be working."

The solution had been evolving over time, Bill said, since their first child was born.

"A lot of times, she'd get up, feed the kids and then go lay down in the other room with the child and not come back," he said.

The Hawkinses have had the sleeping arrangement for six to nine months. Their oldest son is 5 years old and the youngest is 2.

How has the arrangement affected their sex life?

"We are very creative with our sex life," said Kirsten. "It is not required to happen in a bed."

As for its frequency, she added, "Well, having kids changes everything, but beyond that, the sleep pattern, because of the sleep, if anything, we're better rested and it's better. You know."

"I'm not complaining," he said about the frequency.

Clinical psychologist Dr. Joy Browne, who has her own radio show, said that a number of issues come into play in a situation like this. She spoke about the importance of physical proximity, which does not always involve sex.

"I was talking to some single friends about this," she said. "As you know, one of the things that happens when you are dating … is that when you can finally sleep together, it's a statement of trust. It's a statement of compromise and also gives you the chance to at least cuddle, and there's that closeness."

Browne said it's not a good idea to leave your partner in the middle of the night, feed the children and then just stay in the other room.

"I would suggest," she said, "as a compromise … when you really are exhausted, maybe take a night a week or even two nights a week, but the rest of the time, I would much prefer naps because the point is that … sometimes the only time two people get any time together is at night in bed.

"I really don't know very much about their sex life. I don't know what 'creative' means. You want people to feel that they are connected."

Asked if he feels it's important for him to go to sleep with his wife right next to him, Bill said, "Well, I'd say certainly that there are trade-offs there, and we have looked at a lot of different types of solutions to the problem, and, you know, as far as taking naps in the middle of the day, that would be great. I guess I heard an offer to baby-sit from the psychologist there, and that would be fantastic. We'll take her up on that.

"No, but what we have found is that it is a trade-off. What we're getting back is a much higher quality relationship. We put the kids to bed and we have several hours together where we're both rested and we can talk about the day and cuddle up on the sofa and go out on dates."

Browne, describing herself as "a great fan of the marital bed," pointed out that many issues are brought to the surface and discussed in bed, when physical proximity encourages intimate discussion.

"Being in bed together means that sooner or later, you are probably going to have to deal with something because somebody is in that last quarter of an inch and you say, 'Honey, what's the problem?'" she said.

So do Kirsten and Bill expect to continue their arrangement, or might they, at some point, be in the same bed?

"Some day, when we have time for naps," said Bill.