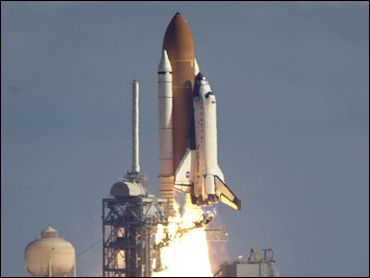 It will take some time to determine the cause of the breakup of the 22-year-old space shuttle Columbia -- but one of the leading theories at the moment is that the thermal tiles on the left wing were damaged during liftoff.

Oddly enough, those heat tiles have been a recurring problem for the shuttle, starting even before its first mission to space in April 1981.

The oldest and heaviest orbiter in the five-craft shuttle fleet, Columbia was named after the Boston, Mass., sloop that explored the Columbia River – to which it gave its name - in the Pacific Northwest in the 1790s. Among NASA workers, it was known as OV-102, for Orbiter Vehicle-102.

It was commissioned in the 1970s, after the elation of the 1969 moon landing had waned. A cash-strapped NASA was being forced to choose between a space station and a space shuttle. As CBS News correspondent Martha Teichner reported on Sunday Morning, NASA chose the shuttle and barely had enough money to build it and get it flying.

Its biggest selling point was that it would be a kind of combination airplane and spacecraft, reusable and therefore supposedly economical, each one good for at least a hundred missions.

The Columbia was ready in the late 1979, but the tiles began falling off as it piggybacked from the factory in California to the Kennedy Space Center in Florida. Another year and a half went by before she was ready for space flight.

It took almost a dozen years and $10 billion to get the shuttle program launched. Columbia lifted off on the first-ever shuttle mission April 12, 1981. Due to last-minute delays, it happened by chance on the 20th anniversary of the world's first manned space flight, a brief trip by Russian Yuri Gagarin.

In Florida , an estimated 600,000 people turned out to watch this wonder of engineering streak into the sky. Again, there were problems with the tiles, but the crew came back safely.

NASA reports that a post-flight inspection of Columbia revealed that an overpressure wave, which occurred when the solid rocket boosters ignited, resulted in the loss of 16 heat shield tiles and damage to 148 others.
Columbia continued to make history as it embarked on four more voyages as the lone U.S. space shuttle until 1982, when Challenger was launched.

From 1983 to 1990, it made six more voyages to space. Then in 1991, it was the first orbiter to undergo the scheduled inspection and retrofit program. It was transported August 10, 1991, to prime shuttle contractor Rockwell International's Palmdale, Calif., assembly plant to undergo some 50 modifications, including the addition of carbon brakes, drag chute, improved nose wheel steering, removal of development flight instrumentation and an enhancement of the tiles, its thermal protection system.

The orbiter returned to Kennedy Space Center Feb.9, 1992, to begin processing for a mission in June. It flew six more missions before returning to Palmdale for its first ODMP, or scheduled maintenance.
On Sept. 24, 1999, Columbia was transported to Palmdale California for its second ODMP, a 122-million-mile checkup that included more than 100 modifications on the vehicle. During the 17-month retrofit, it became only the second orbiter to be outfitted with multi-functional electronic display system or "glass cockpit."

By this time, the 18-year-old orbiter had flown 26 of NASA's 109 shuttle missions. It was returned to service in spring of 2002. At that time, Astronaut John Young, who commanded the first-ever 1981 space shuttle mission, pronounced the craft "a safer shuttle today than the day it first launched."

"Columbia has gotten better as it has gotten older," he said. " It's gone from test flights to doing things we once never dreamed we could do."

Shuttle Program Manager Ron Dittemore added, "Columbia is fit to fly for many more years. It is safer and more capable than it has ever been, a result of the thorough maintenance and continuous improvements that have been incorporated regularly into the shuttle fleet."

Columbia lifted off on the 113th shuttle mission and its 28th – and we now know its last – flight on Jan. 16, 2003. The climb to space appeared uneventful, CBS News space consultant Bill Harwood, reported but about one minute later tracking cameras showed a piece of foam insulation from the shuttle's external tank breaking away and hitting the left wing.

Entry flight director Leroy Cain said a detailed analysis of the debris impact led engineers to believe there was no serious damage. Columbia was not equipped with a robot arm for this Spacehab research mission and the impact area was not visible from the shuttle's crew cabin.

Whether the debris caused enough damage to compromise the wing's heat tiles is not known but it is one of the prime theories being explored.

Former astronaut Story Musgrave was among the many astronauts who flew aboard the Columbia. When asked once how risky it was, he answered, "It's a beautiful butterfly that's bolted to a bullet."