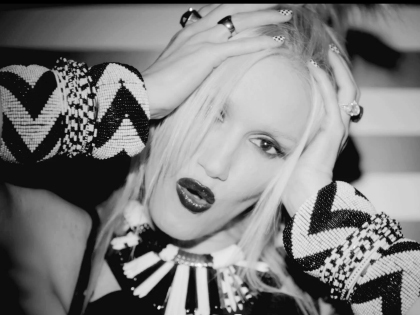 (CBS News) This has been a pretty interesting and rather nostalgic past few weeks in terms of music. I've personally seen two bands I listened to and enjoyed way back in middle school suddenly resurface to some great sales and tons of buzz, and started questioning if I might have fallen into some sort of space-time continuum vacuum or accidentally walked into the TARDIS (a nod to all of you who watch one of the best shows out there right now).

But getting back on track, we start this week's round-up with one of those two blast-from-the-past bands I mentioned who are rocking out all over again: No Doubt!

Their latest music video for the song "Push And Shove" also features Busy Signal and Major Lazer. So am I the only one who thinks that Gwen Stefani is as beautiful and awesome now as she was almost twenty years ago? Seriously, she just seems to defy time! Just saying.

Next up, more music and nostalgia, but in a totally different way. Watch Jimmy Fallon and the leading men of the television show "Guys With Kids" break down a fun "History Of TV Theme Songs" in the Late Night with Jimmy Fallon sketch below that will have you flash back to your old cathode ray tube television. The musical medley starts at about 45 seconds into the clip.

And we turn from the old-made-new again to the new-made... well, actually, it's just new. But it's also very cool and visual, with an almost retro gaming aesthetic that ups the ante. Check out the music video for Haisuinonasa's song "Dynamics of the Subway" directed by Keita Onishi below.

We finish this week's round-up on a note of levity and fun that transitions oh-so-well from an almost video game aesthetic to a literal video game-turned-modern music video. It seems the popular game Skyrim is not immune to the K-Pop sensation that is Psy and has gone "Gangnam Style". Watch the hilarity ensue below in a video from YouTube user abexomotron1.

And on that note, I hope you all enjoyed this week's Friday music round-up and definitely make sure to keep coming back to The Feed for all your viral (and music) video needs!