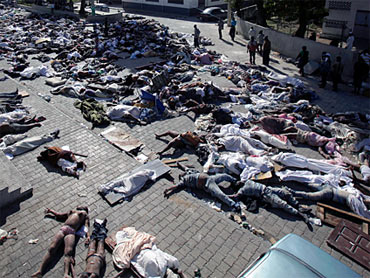 Time is quickly slipping away for earthquake survivors trapped beneath rubble as rescue workers race to save victims of the 7.0-magnitude temblor that ravaged Haiti this week.

Friday marks the third full day after the quake - a potentially critical threshold for finding survivors. Relief workers say the first 72 hours after a disaster are critical to saving lives.

After that, Tamman Aloudat, a senior official at the Red Cross, told CNN that relief efforts should be diverted to helping care for the living instead of searching for trapped victims.

"Very soon, attention should go to avoiding epidemics," he said.

However, there was good news on the rescue front: 14 people were pulled out of the collapsed Hotel Montana Thursday night, Reuters reports. That includes five Americans that were in Haiti for a conference. But as many as 70 are still buried, rescue workers fear.

As the clock continues to tick on rescue efforts, numerous other challenges confront survivors and the relief workers trying to help them:

Dead Bodies: Haitian President Rene Preval told The Miami Herald that over a 20-hour period government crews had removed 7,000 corpses from the streets and morgues and buried them in mass graves.

Small groups could be seen burying dead by roadsides. Other dust-covered bodies were being dragged down streets, toward hospitals where relatives hoped to leave them. Countless dead remained unburied, some in piles. Outside one pharmacy, the body of a woman was covered by a sheet, a small bundle atop her, a tiny foot poking from its covering.

There have also been reports of angry Haitians stacking bodies in the street to form roadblocks, venting frustration at the slow pace of relief supplies arriving.

In the center of the capital, the stench from the bodies beginning to rot in the sun, combined with the acrid dust still choking the air, is forcing people to cover their faces with anything available, reports CBS News correspondent Jeff Glor.

The Red Cross estimates 45,000 to 50,000 people have died. As the bodies continue to decay, the health risks they pose become greater.

Looting: After days with no food and no sign of help, desperation began turning to violence in the city's old commercial center with gangs of machete-wielding men roam the streets, reports CBS News correspondent Kelly Cobiella.

Crowds are emptying the stores, grabbing anything they can carry - even mattresses, to avoid another night sleeping on concrete.

After initial reports that the U.N. World Food Program warehouses had been heavily looted, spokeswoman Emilia Casella said officials in Port-au-Prince had recovered most stocks from four warehouses in the city, and would be handing out 6,000 tons of food aid shortly. The WFP has 15,000 tons of food in the country.

Ordinary Haitians sensed the potential for an explosion of lawlessness. "We're worried that people will get a little uneasy," said attendant Jean Reynol, 37, explaining his gas station was ready to close immediately if violence breaks out.

"People who have not been eating or drinking for almost 50 hours and are already in a very poor situation," U.N. humanitarian spokeswoman Elisabeth Byrs said in Geneva. "If they see a truck with something, or if they see a supermarket which has collapsed, they just rush to get something to eat."

"They obviously took advantage of this disaster," Izard said.

Distributing Food and Water: "We need food. The people are suffering. My neighbours and friends are suffering," said Sylvain Angerlotte, 22. "We don't have money. We don't have nothing to eat. We need pure water."

Relief efforts are still hampered by logistical problems, but aid is increasingly pouring into the area.

From Europe, Asia and the Americas, more than 20 governments, the U.N. and private aid groups were sending planeloads of high-energy biscuits and other food, tons of water, tents, blankets, water-purification gear, heavy equipment for removing debris, helicopters and other transport.

Casella, spokeswoman for the WFP, said the agency was preparing shipments of enough ready-to-eat meals to feed 2 million Haitians for a month.

Meanwhile, hundreds of U.S. troops and an aircraft carried have arrived for the Haiti relief effort, and the commander on the ground said Friday that food, water, medicine and other emergency relief supplies are being rushed to earthquake victims.

But the influx of relief supplies has generally been met with bottlenecks everywhere, beginning at a main airport short on jet fuel and ramp space and without a control tower.

Adm. Mike Mullen, the chairman of the Joint Chiefs of Staff, said there would be up to 10,000 U.S. troops in the area by Monday.

But State Department spokesman P.J. Crowley acknowledged the limitations of the initial U.S. effort to get water, food and other emergency requirements into Haiti. He said, for example, that the main port at Port-au-Prince, the capital, was so badly damaged in the quake that it is not useable. He likened the stream of aid thus far as flowing through a "garden hose" that must be widened to a "river."

Medical Treatment: Heavy damage to at least eight Port-au-Prince hospitals severely hampered efforts to treat the many thousands of injured, the World Health Organization said in Geneva. At least 2,000 injured were reported to have been treated at hospitals next door in the Dominican Republic, including the president of the Haitian Senate, Kelly Bestien.

Injured Haitians, meanwhile, waited for treatment in makeshift holding areas - outside the General Hospital, for example, where the stench from piles of dead, just a few yards away, wafted over the assembled living.

Stefano Zannini, Head of Mission for Doctors Without Borders/Medecins Sans Frontieres (MSF) in Haiti, said Friday that there are thousands of people needing immediate surgical intervention. So far, MSF teams have treated and stabilized well over 1,500 wounded, and are performing emergency surgery at Choscal Hospital in the Cite Soleil area.

Patients who have been rescued are being transported by motorbikes, by pickups, even by doors used like stretchers. Most injuries, Zannini said, are open fractures. His teams have also seen people badly burned. But, he added, they have had some deliveries too.

"Our first surgical activity was a complicate delivery, and I'm very proud to share with you that we were able to save both the lives of the baby and mother," he said.

Zannini described thousands of people wandering the streets, and said the three things they are most urgently seeking are medical attention, food, and shelter.

Meanwhile, the aircraft carrier USS Carl Vinson has three surgical operating rooms and can do medical evacuations as well as ferry supplies and people to and from land. And the Navy hospital ship USNS Comfort was to leave Baltimore Saturday with some 250 medical staff, stop in Florida to pick up 300 more people and set off for Haiti Thursday.