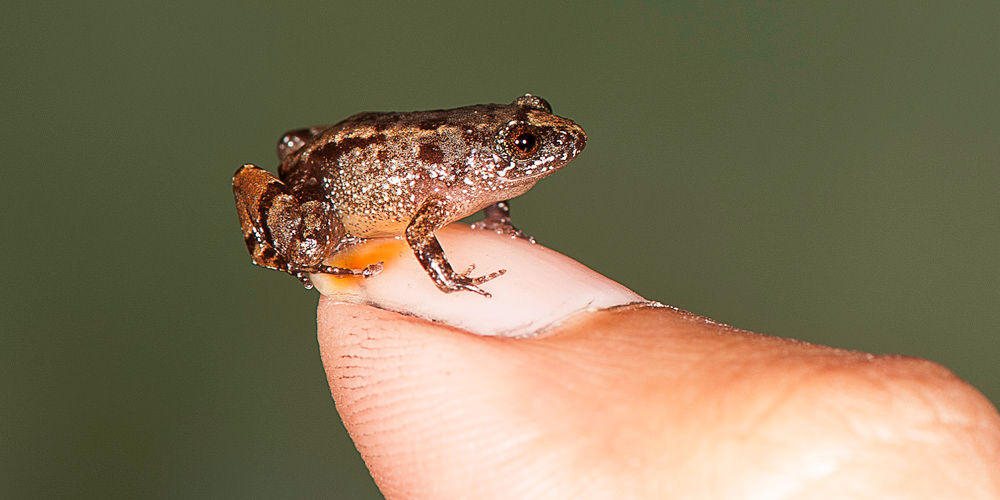 Some of the smallest known frogs were recently discovered following a five-year survey in India. Seven new species of “night frogs,” in the Nyctibatrachus genus, include four species that are among the tiniest frogs ever found, capable of comfortably crouching on a thumbnail with room to spare.

Though the frogs were abundant in the survey area, their minuscule size and chirping calls -- which resemble the sounds of insects -- enabled them to remain undetected until now, scientists wrote in a new study.

Their discovery raises the total number of known night frog species to 35, with seven species recognized as miniaturized — smaller than 0.7 inches. [So Tiny! Miniature Frog Species Are Among World’s Smallest (Photos)]

The smallest of the newly described frogs -- Nyctibatrachus manalari, N. pulivijayani, N. robinmoorei and N. sabarimalai -- measure between 0.5 and 0.6 inches.

N. webilla and N. athirappillyensis are slightly larger than their cousins at approximately 0.7 inches and 0.8 inches respectively, while the largest of the new finds, N. radcliffei, measured 1.5 inches.

It is home to hundreds of species of animals and plants that are recognized as globally threatened, with 145 species listed as endangered and 51 as critically endangered, UNESCO reported in a site description.

Over the past decade, scientists have described 103 new species from the Western Ghats, including the unusual Indian purple frog, which is found nowhere else on Earth and is the only living frog in an evolutionary lineage dating back to the Jurassic.

What the future holds for night frogs -- and for many of their fellow amphibians -- is uncertain, as more than 32 percent of the Western Ghats frogs are threatened with extinction, according to the study co-author, SD Biju, a biologist and head of the Systematics Lab with the Department of Environmental Studies at the University of Delhi, India.

The new findings emphasize that biodiversity in the Western Ghats is dramatically underestimated -- even in well-studied groups like night frogs -- and highlight the urgency of implementing conservation measures to protect threatened wildlife, and to preserve the habitats of as-yet undiscovered species, the study authors wrote.

The findings were published online Feb. 21 in the open access journal PeerJ.