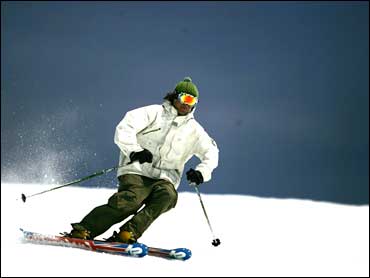 Heading to the ski slopes for a winter break? Don't forget to pack the sunscreen.

That's right, sunscreen. Cold temperatures don't cancel out the burning power of the sun's rays. Schussing down an alpine trail is as good a way to get a sunburn as lolling poolside or stretched out on a sizzling beach.

"The story really is much the same whether your spring break is in St. Petersburg, Fla., or Sunshine (ski resort), Banff," says Dr. John Arlette, a Calgary dermatologist who is head of skin cancer surgery at the Tom Baker Cancer Centre.

"Some of our best sunburns happen in late winter, early spring skiing. Because you're at elevation, there's increased amounts of ultraviolet light coming down."

Sunburn, frostbite, fractures, sprains, avalanches - there are a variety of health risks that await the unprepared on slopes jam-packed with March break skiers and snowboarders. Taking precautions and paying attention will go a long way towards ensuring all you bring home are happy memories, experts say.

"I always tell people to be particularly careful around snow and water, because both of them reflect a great deal of ultraviolet radiation," says Krach, who serves as an educational spokesperson for the Skin Cancer Foundation, a New York-based organization that advocates for skin cancer prevention.

He suggests using sunscreen with a high SPF - sun protection factor. It should be applied about 30 minutes before heading out and should be slathered on places that will be exposed to sunlight. With the reflection from the snow, that includes under the chin, Krach says.

"If it's a particularly intensely sunny day, just putting it on once in the morning isn't necessarily going to cover you for the entire day," he warns, suggesting it would be wise to reapply at lunch and other breaks.

Another good idea is paying attention to your surroundings and your level of fatigue.

"It will be busy. And so people should take that into account if they want the best experience," says Brian Leighton, safety manager for Whistler Blackcomb, the popular ski resort north of Vancouver that will host the alpine events during the 2010 Vancouver Winter Olympics.

On March break weeks, ski hills can be especially busy with people who ski or snowboard but once a year - a crowd known as "ski weekers," Leighton says.

Unlike folks who get out regularly throughout the season and have their muscles toned for the particular challenges of carving one's way down a mountain, ski weekers can be out of shape. Even people who ski regularly at smaller hills can find the long trails of a big resort more demanding than they imagined.

"People get very weary. They're on an easy trail, but it's 10 times as long as the easiest trail at their own resort," Leighton says.

"People shouldn't bite off more than they can chew. If they're going to be here for a week, then work up. Don't go out and try the hardest stuff Day 1 and spoil your vacation by getting hurt or becoming so tired that you're useless for the next few days."

Injury prevention experts recommend wearing helmets on the ski slopes. Recently published Canadian research pointed to a rise in traumatic brain injuries and spinal cord injuries among skiers, a trend attributed to the increasing popularity of acrobatics and skiing at high speed.

Whistler Blackcomb takes that a step further; it recommends skiers wear helmets. But it stops short of requiring helmets, except in the children's ski school and the highest level ski parks, where advanced skiers perform jumps and other feats.

Whistler Blackcomb doesn't have a policy against wearing IPods or MP3 players while skiing, though Leighton thinks it's a bad idea to be listening to tunes when you are sharing the hills with hordes of other people. There can be upwards of 20,000 people on the slopes on a busy day at Whistler Blackcomb, which is Canada's biggest ski resort.

"I don't see any problem personally with people wearing them on lifts, but I think you need your senses about you when you're skiing, and that is an interference," he says. "When it's busy and there's lots of people around you, I just like to have my wits about me and not be distracted."

Having your wits about you is also important when it comes to preventing or responding to frostbite, says Arlette, who is an enthusiastic participant in outdoor sports.

Cold temperatures and high speed combine to increase the risk of frostbite, he says, noting he recently treated a snowmobiler who wound up with "beautiful frostbite in the middle of his cheeks."

"The thing you have to watch for is that change that happens when it (skin) starts to get white," Arlette warns. "If it's turned white, that's an indication you've had a really significant thermal insult, which means you've got frostbite."

Skiers who develop frostbite need to get to somewhere warm where they can rewarm the skin. And they should stay there - Arlette says it isn't a good idea to subject the skin to additional cold after it has been rewarmed.

And in the aftermath of frostbite, skin will need gentle care, he says.

"Skin that's been frostbitten becomes a little bit mummified. It dries and it will gradually peel off. Usually you want it to come off fairly uniformly and over a short period of time. So you don't want to pick. Use a good emollient on it. Vasoline works well."

Specially-made emollients can help prevent frostbite. They are a bit like the body grease that long-distance swimmers used to use to attempt crossings of one of the Great Lakes or the English Channel, Arlette says. They should also contain sun protection.

In addition to paying attention to yourself and others, Leighton says it's critical to watch for and respect avalanche warnings.

Whistler Blackcomb has avalanche terrain within its boundaries; experts on staff monitor conditions and issue daily forecasts, which can lead to closures of parts of the resort.

If signs say an area is closed, consider it off-limits, Leighton says.

"And people see some slopes that look very inviting in the back country, out of bounds. And they go down there and they spend the night out. It's not anything you want to do. And we end up putting our employees at risk and the local search and rescue with these night searches."