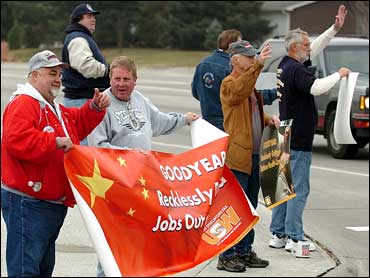 Union members battling Goodyear Tire & Rubber Co. took their picket lines to tire retailers across the country on Saturday as part of an effort to gain leverage in talks with the company.

About 50 members of a Lincoln chapter of United Steelworkers protested at two Goodyear retailers here, decrying the company's use of replacement workers during the 2-month-old strike. About 150 additional rallies were planned in the U.S. and Canada.

"We know what it takes to build tires,x and unskilled workers just can't do it. We do not want the general public riding their lives on temporary workers," said Gary Schaefer, 54, vice president of the United Steelworkers Local 286 in Lincoln and a 34-year employee of Goodyear.

Members stood along a busy street, carrying signs with pictures of flat tires that read, "Recklessly driving experienced workers off the job."

Leo Gerard, USW international president, visited with strikers Saturday in the Cleveland suburb of Parma, Ohio, and planned a stop in Akron, where Goodyear is based.

Gerard said the point of the protests is to tell consumers about what the union believes is unfair treatment by Goodyear, including plans to slash health care and retirement benefits.

"They're literally stealing the money out of our retirees' pockets," Gerard said.

Goodyear spokesman Ed Markey said the protests do not affect plans to return to the bargaining table. Negotiations are scheduled to resume Monday in Pittsburgh, the first talks since meetings broke off Nov. 17.

"Our goals in the negotiations remains the same, and that is to reach a fair agreement that enables us to be competitive and win with our customers," he said.

The company's temporary workers are qualified and received the same training as all new employees, Markey said.

"Goodyear will never compromise quality," he said. "We have had quality systems in place and dedicated experts to run those systems since before the strike began. Additionally, every tire we make is screened for quality before it leaves the factory."

About 15,000 workers are on strike at 12 U.S. and four Canadian plants, counting union members on layoff, sick leave or other time off. Goodyear workers went on strike Oct. 5 after talks broke down on a new contract.

Among those on strike are workers at the Goodyear plant in Union City, Tenn.

Since the strike began, Goodyear has been making tires at some of its North American plants with nonunion and temporary workers as well as some managers and relying on production at its international plants to help supply North American customers.

In Lincoln, Ted Kastl, 56, who has worked for Goodyear 35 years, was hopeful that the storefront protests would force the company's hand.

"I think this could lead to us getting what we want. It will put more pressure on Goodyear to get things resolved," Kastl said.

Striking workers have found it difficult to make ends meet, but $50-a-week payments from the union for groceries and gas have helped, said 20-year employee Kurt Bomberger, 43.

The union's strike fund could drop below $100 million if the dispute drags into March, Gerard said, at which time all members would be asked to contribute $5 to fill the coffers and support striking workers.

In suburban Pittsburgh, more than 80 people handed out fliers and urged holiday shoppers driving past a Goodyear service center at a mall to honk in support of Goodyear employees. Most drivers obliged.

"I'd say (we're getting) a lot of support, and that's what we're doing: educating the public on what the dispute is about," said John Sellers, a retired Steelworkers official.

The Steelworkers there were joined by members of the AFL-CIO and American Federation of Teachers.

AFL-CIO President John Sweeney said the union's decision to join forces with the USW for Saturday's protests was a statement by working people to Goodyear and other companies.

"We're going to hold the line for the nation's middle class. Working people everywhere have been pushed to the brink by giant multinational conglomerates like Goodyear," Sweeney said. "We're going to push back."

Goodyear has said it intends to close its Tyler, Texas, tire plant by next year because the company is ending production of low-profit private-label tires. The union wants all plants protected from closing. The USW also strongly objected to a company proposal for creating a retirees' health care trust, which the union argues shortchanges retirees.

Goodyear executives have said they are seeking a contract that will help the company be globally competitive. The company has said its offer protects wages, proposes upgrades to union plants and offers a plan to provide health care coverage for retirees.