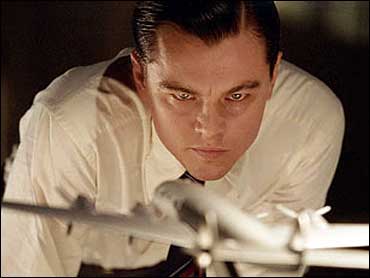 Moviegoers have more than holiday specials and animated fantasies to look forward to in the next month.

November and December are the months when Hollywood studios release their big guns, to keep them fresh in the minds of Oscar voters. So the month is filled with performances by A-list stars in Academy Award contenders.

The Early Show entertainment contributor Laurie Hibberd provided some highlights of the cinematic treats to come this holiday season.

George Clooney, Brad Pitt, Matt Damon and Julia Roberts reteam for the comic caper "Ocean's Twelve" and this time Catherine Zeta-Jones is along for the ride. Roberts also stars with Jude Law, Natalie Portman and Clive Owens in the dramatic tale of love and infidelity, "Closer", directed by Mike Nichols.

Roberts isn't the only star doing double duty. Dennis Quaid stars as a pilot working with crash survivors to build a new plane from the old one's wreckage in "Flight of the Phoenix." Quaid also stars with Topher Grace and Scarlett Johansson in the comedy "In Good Company," while Johansson also co-stars with John Travolta in the drama "A Love Song for Bobby Long."

When it comes to Oscars, an early frontrunner looks to be Martin Scorsese's "The Aviator." Leonardo DiCaprio stars as Howard Hughes. Last year's Best Actor winner Sean Penn might get another nomination for his performance in "The Assassination of Richard Nixon."

Another of last year's nominees, Bill Murray, leads an all-star cast in Wes Anderson's "The Life Aquatic with Steve Zissou."

Others who'll possibly make the Best Actor shortlist include Kevin Bacon in "The Woodsman," previous nominee Javier Bardem as a paralyzed poet in "The Sea Inside" and Don Cheadle, who plays an African hotel manager who helps save thousands of refugees in "Hotel Rwanda."

More Oscar contenders include the martial arts fantasy "The House of Flying Daggers," which is looking for a "Crouching Tiger, Hidden Dragon" level of success. And eight-time Oscar nominee and three-time winner James l. Brooks directs Adam Sandler and Tea Leoni in the adult comedy "Spanglish."

Also coming up is the Clint Eastwood and Hilary Swank team-up for the boxing drama "Million Dollar Baby." The word is that Eastwood is so proud of this movie that he pushed up its release date (it was supposed to be released to 2005) so it could be released for Oscar contention this year.