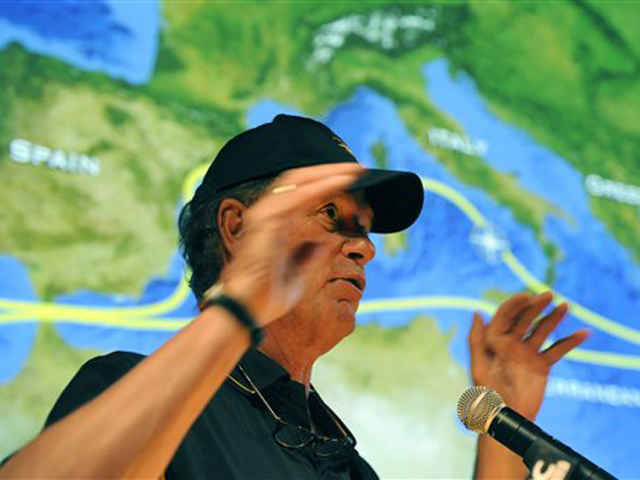 MYSTIC, Connecticut (AP) - Oceanographer Robert Ballard, best known for discovering the Titanic wreck, has new plans to plumb the depths of the seas.

Ballard said Thursday that his latest deep-sea venture will send crews combing through the Black, Aegean and Mediterranean seas for artifacts from ship wrecks and ancient civilizations. His research vessel, the E/V Nautilus, set out from a port in Turkey last week on a four-month mission that will use four remote-operated vehicles and sonar technology to explore lost cities, as well as hydrothermal vents and undersea volcanoes.

At a news conference at Mystic Aquarium in Connecticut, Ballard said that while he has a general idea of what his crew might find, the exploration is about looking for the unknown.

"We're fascinated by extremely confusing parts of our planet and we say `let's go there and see if we can figure it out," said Ballard, a co-leader of the mission who is planning to join the ship later.

The 211-foot (64-meter) ship, carrying a team of about 15 scientists, will travel through waters including the Hellenic and Aeolian Arcs, the Gorringe bank and the Straits of Sicily - a course that will take it near deep trenches, continental faults and cities under the surface of the Mediterranean that are more than 2,000 years old. The journey is expected to wrap up in November off the coast of Israel.

Ballard, who is also a professor at the University of Rhode Island, founded the Institute for Exploration at the Sea Research Foundation, the nonprofit environmental organization that also runs Mystic Aquarium. Besides leading an international team that discovered the RMS Titanic in 1985 on the floor of the North Atlantic, Ballard found the wrecks of the battleship Bismarck and the PT-109 torpedo patrol boat that John F. Kennedy commanded during World War II.

The 69-year-old explorer said his ship will dispatch video and audio feeds from this newest venture to connect with the public as he pursues new discoveries. The material will be available online and at a theater at Mystic Aquarium, and teams of educators will rotate aboard the ship to host information sessions and explain the latest finds.

Mission co-leader Katherine Croff Bell said the live technology lets the ship expand beyond the knowledge of the scientists onboard.

"If we don't have the proper expertise on the ship we can call somebody on shore and have them be a part of the exploration in real time," Bell said.

Paul Johnson, an oceanographer at the University of Washington who has worked with Ballard, said these types of expeditions help stir public interest in deep-sea research. He said the voyage was not a traditional research mission and would likely involve a mixture of education, entertainment and "probably some science mixed in there."

The ship's primary mission is to make discoveries, not try to extract artifacts or disturb the seabed. For Ballard and the E/V Nautilus, that means setting themselves up for to find something new by planning trips over unusual or unknown areas.

"What really excites me is when you go looking for one thing and find something more important," Ballard said.

"So we are all about creating moments of discovery by trying to get a little lucky," he said.