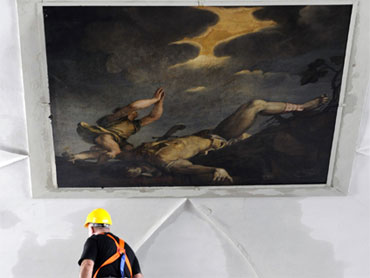 A painting by Renaissance master Titian in one of Venice's most picturesque basilicas has suffered water damage after firefighters doused the basilica while battling a nearby blaze.

The fire broke out Sunday night at the seminary next to the Santa Maria della Salute basilica, a 17th century octagonal-shaped church that dominates the view of the Grand Canal.

Sgarbi said firefighters doused the basilica as well and that water seeped through the roof, damaging Titian's "David and Goliath."

The masterpiece is one of three Titians that line the ceiling of the sacristy. The other two weren't damaged; Sgarbi ordered "David and Goliath" removed for repairs.