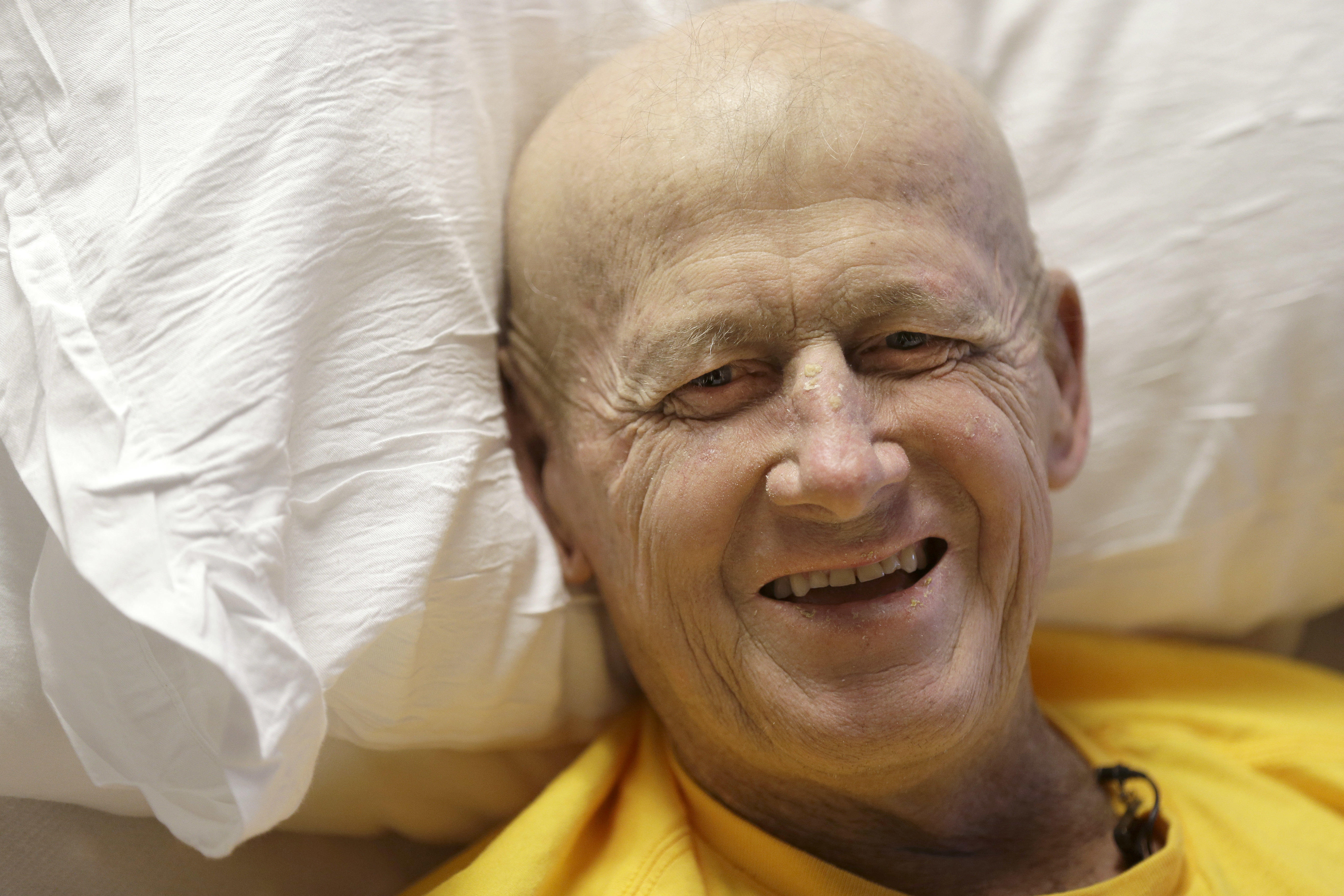 HOUSTON -- Craig Sager’s once lustrous chestnut hair is down to a few unruly strands because of chemotherapy and a simple green T-shirt and blue shorts adorn the broadcaster known by millions for his ostentatious wardrobe and easy rapport with the NBA’s elite.

An IV pole holds the stem cells he’s counting on to save his life. He cradled the tube, watching the crimson liquid drip, drip, drip in perfect cadence into his cancer-stricken body.

TNT’s beloved basketball broadcaster received a rare third bone marrow transplant on Wednesday to fight an aggressive form of leukemia. The 65-year-old Sager has battled acute myeloid leukemia since 2014 and announced in March he was no longer in remission.

Sager knows the odds are against him. Yet, he seems unfazed.

Sager has twice received a bone marrow transplant with stem cells and each time he went into remission for several months. His son, Craig Sager II, was the donor. This time, an anonymous 20-year-old donor was considered a perfect match.

Sager has been hospitalized for a month and has another monthlong stay ahead. He hasn’t thought a lot about the man whose bone marrow could change everything for him. But when he learned of his age, he expressed a half-serious concern.

“My only thing was I was afraid that when he signed up to be the donor, he may have been in some drunk fraternity house trying to impress his date,” said Sager, with a smile. “And they call him up the next day and say: ‘Want to come down to the hospital?’ and he’s like: ‘What?’”

His fears turned out to be unfounded.

“He came through,” Sager said.

The latest of nearly 100 procedures Sager has endured in his well-publicized fight was performed at MD Anderson Cancer Center in Houston. The transplant began in the late morning and was completed more than 10 hours later.

“It’s less than 1 percent of the total number of transplants,” Qazilbash said. “It’s very rare to have three transplants.”

Sager, who has worked for TNT for more than three decades, says he’s open to trying anything doctors think might help.

“I’ve had every chemo in the alphabet, most of them more than once,” he said. “Some of them that aren’t even in the alphabet, they’re just numbers - clinical trials. But I bet if you added all those up it would have to be like 60- or 70-something. I’ve had 23 bone marrow aspirations. Having one isn’t fun and I’ve had 23. So that’s been tough.”

Despite the rigors of treatment and how they can ravage his body, he’s never thought about giving up. He gets angry when he meets other patients who say they’ve grown weary of fighting.

“Man, life is too beautiful, too wonderful, there’s just too many things,” he said. “It’s not just you. It’s your family and kids and all. Fight. Fight until the end. Fight as hard as you can.”

With his radiant smile and TV-perfect persona, it takes time to peel back the layers of positivity and catch a glimpse of the difficulties.

“His attitude is, nobody wants to hear it,” said his wife Stacy, his full-time caregiver and No. 1 fan. “And so it makes you reflect on yourself and the things that you say when you’re complaining about little things in life and trivial things, and it just puts things in perspective.”

But there are times, often as night creeps into early morning, where it all becomes too much. No medication can help.

“I’ve never had any of those days where I’ve actually said ‘why me,’ or ‘I can’t do it,’” he said. “But I’ll have some dark nights where I’ll be here by myself and maybe getting some medicine that’s making me jump around like a rabbit. And I’m in pain and I’ve got chills and I’ve got fever and I’ve got everything mixed into one and I’m throwing up and have diarrhea ... and I’ll just say: ‘Stacy, I need you. I need you.’

“And she’ll come to me and just hold me and it just makes it better,” he said.

A few days before his transplant, Stacy came down with a bad cold and doctors sent her home, fearful she’d transmit her illness to her husband. Hall of Famer and TNT colleague Charles Barkley heard she couldn’t be there for a couple of days and hopped on a plane from Phoenix.

However, Sir Charles had hip replacement surgery less than a month ago and wasn’t cleared to travel. He said his doctor was livid when he learned Barkley had defied orders and flown halfway across the country. Barkley informed the doctor that it was an emergency.

“Craig Sager is one of the most interesting people I’ve ever met,” Barkley said. “We go to see Sager to cheer him up and by the time you leave you’re like, ‘Is anything wrong with him?’ He has the most positive attitude ... When you go to try and cheer him up his attitude is so upbeat he cheers you up.”

Sager found inspiration in a girl who lost her fight with cancer before her ninth birthday. He befriended Lacey Holsworth and her family while working on a story about her illness and remained friends with her parents after she died in April 2014. Holsworth had cheered on the Michigan State basketball team and had a close friendship with star Adreian Payne.

Last weekend, her parents visited Sager in his Houston hospital room. They left him with a more tangible reminder of her bravery.

“They brought me little Lacey’s boots that she used to always wear to games and a picture of her wearing them,” said Sager, clutching the high-top cheetah footwear with laces made from silk ribbons. “That little girl was so amazing. Fought for all of those years, was always positive, always cheerful, always brought other people’s spirits up. So if I’m laying here feeling bad, I just think about Lacey and it puts everything in perspective.”

Sager’s also bolstered by his drive to be back on the sideline for the NBA season. He doesn’t expect to have recovered from the transplant in time for the season-opener on Oct. 25, but aims to return by early November for more of the gentle sparring with the likes of San Antonio Spurs’ coach Gregg Popovich .

It would be a victory not just for him, but for all the people his fight has inspired.

“It means that you’re surviving and you’re winning,” he said. “That you’re knocking down obstacles and clearing hurdles that are put in front of you and you’re doing them with flying colors.”

On Wednesday, five colorful balloons were tied to one side of his hospital bed. Several had birthday greetings and two said: “Happy birthday, it’s your big day.”

Festive, yes. But Sager was born in June.

“When you get stem cells, they say it’s your new birthday,” Stacy explained.

Sager tried to downplay the pageantry surrounding the event, saying it wasn’t “a big deal.”

That earned a sweet, yet stern, admonishment from his wife.